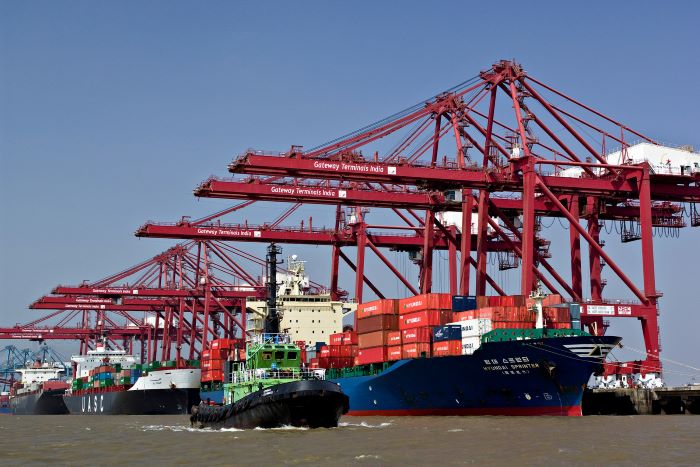 With a flurry of blank sailings in the offing and much lower inbound volumes, Indian shipping industry leaders generally expect container volumes to take a major hit during March and April due to the coronavirus disease 2019 (COVID-19), but anticipate a strong turnaround thereafter, subject to the crisis easing.

“We may see cargo volumes decline by double digits [in April] and then curve upward as things stabilize,” a Mumbai-based industry leader told JOC.com.

The source said ports will also experience a drop in volumes this month, albeit by mid-single digits — probably about 6 to 7 percent.

“Our business or traffic figures may go down for a month or so,” Jawaharlal Nehru Port Trust (JNPT), India’s major container port, said in a statement. “In terms of business, everything may get equalized in the next three or four months depending on the impact of the virus, which is very hard to assess at this time.”

JNPT loads the bulk of Indian containerized trade. APM Terminals Mumbai, JNPT’s busiest gateway, had four blank sailings last month and has six confirmed cancelations in March, of which three are related to the Lunar New Year and the other three are linked to the coronavirus.

JNPT handled 141 ship calls last month, compared with 154 calls in the previous month, according to JOC data. Because most of the services connecting India’s western coast feature “multiple port calls,” similar relative sailing cancelations are imminent at the ports of Mundra and Pipavav.

China accounts for a major portion of imports into Indian ports, whereby reductions in volume have put a crimp on equipment availability.  “Exporters are in a quandary as to how to plan their shipments because of blank sailings and equipment shortages,” a port official said. Imports constitute approximately 55 percent of volumes handled at major public ports.

Indian ports have been caught relatively off-guard by the container dislocation, as it also coincided with the typical fiscal year-end shipper rush to complete their order commitments. While some efforts are being made by carriers to reposition empty boxes from the Middle East, widening export-import imbalances might pose a challenge to mitigating potential inventory deficits. With vessels being overbooked and often leaving containers behind, shippers are being forced to reroute their cargo through available shipping options for transshipment over Jebel Ali, Singapore, or Port Klang.

“Ships offering regular calls at JNPT and Mundra — connecting the larger trade lanes of the United States, Europe, and Africa — are chock-a-block, whereby carriers have been more successful with rate hikes,” a market observer said.  For example, Mediterranean Shipping Co. will implement a rate hike of $400 per TEU and $500 per FEU on India-US trades, starting March 15, on top of similar increases it began applying March 1. As a result, general export spot rates from JNPT and Mundra to the US East Coast (New York) have increased to $2,100 and $2,700 on average, respectively, from about $1,800 and $2,400 last month, according to JOC research.

At the same time, JNPT is hopeful of meeting any such challenges fueled by volume surges. “JNPT is well equipped as the first phase of the fourth container terminal is already operational and it has enough capacity to handle the increase in volume once the disruption begins to ease,” port chairman Sanjay Sethi told JOC.com.

But from an industry perspective, the bigger play is on the landside where some concerns could arise notwithstanding the port’s recent dramatic productivity improvements — average railroad dwell times have nearly halved in this fiscal year over year.

“Ports that have a significant exposure to the affected cargo categories could see an impact on their cargo volumes in the near term,” K. Ravichandran, senior vice president at rating agency ICRA, said in a statement. “The extent of the impact will be dependent of the duration of restriction in China’s industrial activities due to COVID-19 and the pace of subsequent recovery.”

Indian containerized trade took a 5.5 percent hit in February, month to month, but that fall looks more in line with historical trends seen during the month than the coronavirus-related impact. The country’s major and minor ports together handled 1.41 million TEU last month, versus 1.5 million TEU in January. But that was higher than the 1.32 million TEU reported during February 2019, JOC data shows.