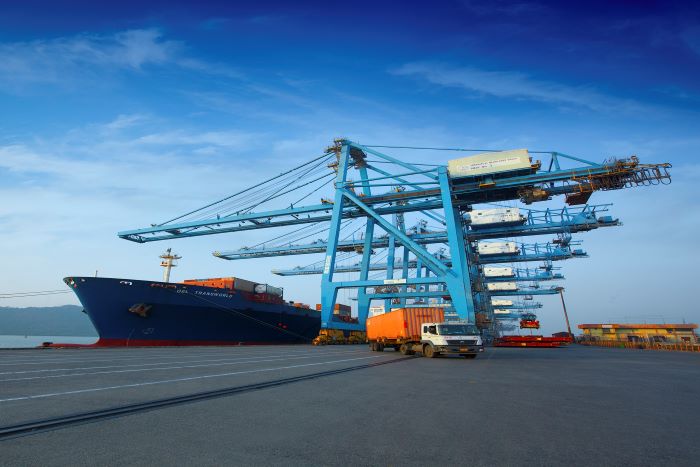 February port throughput at India’s JNPT through Friday morning was slightly lower than the same month last year at 293,077 TEU, down from 299,094 TEU. Photo credit: JNPT.

As customs clearance delays for Chinese imports threaten to clog port container yards and off-site freight locations, the Indian government has stepped in to ease the pain for beneficial cargo owners (BCOs) caught up in the coronavirus-related supply chain turmoil.

Following intervention by various industry groups, the government has issued a directive to customs authorities across the country to waive penalties usually levied toward late filing of the shipment data, subject to valid reasoning.

“There is (a) likelihood of import containers arriving from China being stranded in the port/CFSs [container freight stations] on account of non-receipt of basic import documents by the Indian consignees, resulting in late filing of bills of entry,” Customs at Jawaharlal Nehru Port Trust (JNPT) said in a public notice. “In order to facilitate clearance of the consignments, it is decided that the bills of entry filed late for clearance of import consignments from China will not attract any late fee charges.”

Similar advisories have also been issued by customs officials at other Indian ports, according to industry sources.

Bills of entry are filed online prior to the vessel’s arrival at the port. Failure to do that means cargo interests or consignees generally face a penalty of Rs. 5,000 ($70) per day for the first three days and Rs. 10,000 per day thereafter.

“Members were facing problems for import containers arriving from China being stranded post-outbreak of coronavirus in the port/CFSs on account of non-receipt of import documents, resulting in late filing of bill of entry,” the BCBA said.

Additionally, the government put out a notice announcing around-the-clock customs services across seaports and air cargo facilities in the country to prepare for a potential buildup in export and import volumes once the disruption begins to ease.

“To handle such [an] emergent situation, necessary steps need to be taken in advance ... to address any congestion or delay or surge on account of the prevailing conditions or [a] cessation thereof,” the government said.

A JNPT-based official at a major carrier told JOC.com inventory levels at port yards and off-dock warehouses are currently well within “control” as import arrivals have been down in the past weeks due to a flurry of coronavirus-related blank sailings on the China routes. “Should there be a spike [in volumes] in the coming days, then there could be a cause for worry,” the source said.

The official also warned the market could run into serious shortages of empty containers as much of equipment repositioning usually takes place on intra-Asia trade lanes. “To replenish inventories in the short term, carriers might look at options out of the Middle East region, but those may not sufficiently fill the gaps, besides predictive cost disadvantages,” he said.

The domestic market research firm ICRA, in a recent report, said the coronavirus (COVID-19) outbreak has had an adverse impact on the Indian freight industry, given the scale of trade. “The shutdown of industries in China is a negative factor for the Indian [export-import] cargo movement as India has significant trade linkages with China by way of import and export of raw materials and finished goods,” the agency said. “Further, with the movement of containers being affected by the cancellation of calls, there could be a disruption in the container cargo movement at Indian ports.”

However, the China disruption has yet to demonstrate a major impact on volumes at JNPT. February port throughput through Friday morning was slightly lower than the same month last year at 293,077 TEU, down from 299,094 TEU.