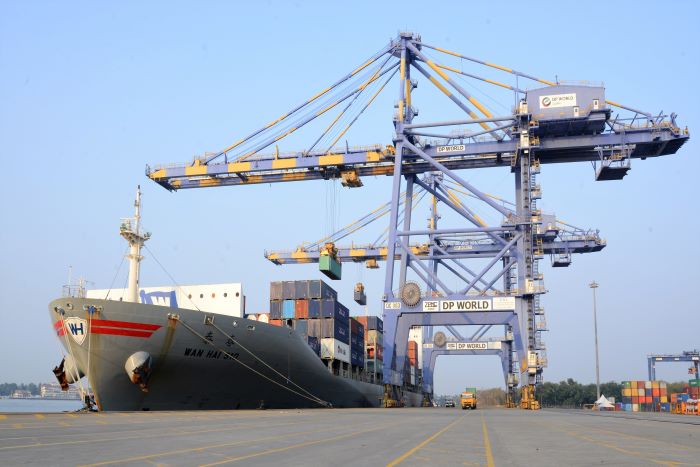 With stakeholder consultation in the final stages, a regulatory measure to streamline India’s terminal handling charges is set to become a reality in the coming days. Photo credit: DP World India.

Indian officials have ruled out making any significant changes to a proposed standard operating procedure on terminal handling charges, saying they could undermine the government’s goal of creating more transparency into logistics costs.

The Container Shipping Lines Association (CSLA), the umbrella body of foreign carriers in India, flagged a host of pain points and modifications, requesting officials consider incorporating them in the final SOP to be released for implementation.

Concerns raised by CSLA intuitively suggest carriers’ underlying uneasiness about terminal handling charges (THC) and other surcharge information becoming a subject of closer public scrutiny. As such, the group sought two key amendments — sharing THC information through carrier digital portals instead of by ports or terminals on their electronic platforms, and specifying THC rates on the body of bills of lading be made an exporter option, meaning discretionary rather than mandatory.

In addition, carriers wanted to keep vessel-related charges outside the purview of the intended SOP.

However, officials heading logistics reforms at the Ministry of Commerce have turned down the carrier group’s requests, saying the suggestions do not hold any water at this stage.

Further, the officials said carriers need to close a “perception gap,” if any, on who determines THC. “The requirement of the SOP is that the shipping line only needs to specify the ‘freight’ (as in the SOP) charged by it in the face and body of the B/L. There cannot be any quarrel with the requirement, and hence, the changes suggested by CSLA in this regard are not tenable.”

At the same time, officials agreed to some of the relatively minor modifications and addition requests put forward by CSLA — notably the withdrawal of a clause that sought to deal with other surcharges — accepting a view that the current SOP should remain restricted to THC.

The response filed by freight intermediaries — forwarders and consolidators — to the draft SOP has been somewhat analogous to what CSLA stated. Additionally, brokerages questioned the wisdom of authorities seeking to establish a consolidated freight cost.

Earlier, the Indian National Shipowners’ Association (INSA), which represents Indian-flag ship operators, indicated it broadly agreed to the SOP, while making few suggestions they said would enhance the effectiveness of the intended regulatory model.

INSA suggested the Indian Ports Association (IPA), as a governing body for nationwide major port entities, create a repository of THC rates applied by various terminals and make these available to the public on its website. It added that the Indian Private Ports & Terminals Association (IPPTA), representing minor port stakeholders, be asked to do likewise.

The domestic carrier group also requested the government redefine the SOP framework to cover service providers, per se, instead of limiting it to the shipping line. In addition, INSA sought more clarity on how the government intends to deal with “other charges” that importers and exporters often raised during deliberations.

With stakeholder consultation in the final stages, a regulatory measure to streamline terminal handling charges is set to become a reality in the coming days, something touted as a game changer for India’s vastly fragmented, opaque freight industry. The latest government intervention is the culmination of years of effort by various shipper groups, especially the Federation of Indian Export Organizations (FIEO), for a more competitive business environment.