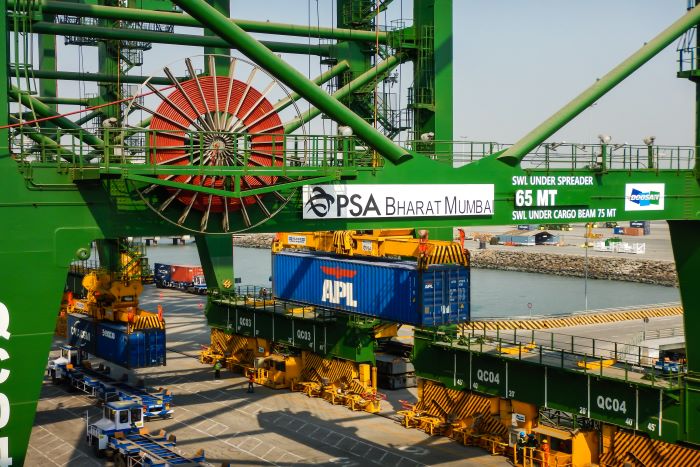 The school of thought behind the investment at Vadhavan was to prevent potential spillover volumes out of JNPT from traveling to private minor ports, given that JNPT would have little room for capacity expansion after the completion of the Bharat Mumbai Container Terminals (above). Photo credit: Shutterstock.com.

After waffling over viability concerns in the wake of rapidly changing industry dynamics, the Indian government on Wednesday approved the development of a greenfield, deepwater port at Vadhavan, about 120 miles north of Jawaharlal Nehru Port Trust (JNPT), under a landlord model with private participation.

The Vadhavan project was essentially conceived as a satellite facility to JNPT, the country’s busiest public container harbor, which had become saturated until PSA International opened the first phase of a 4.8 million-TEU terminal in February 2018.

The government estimates the new project will require an investment of Rs. 65,544.54 crore, or approximately $9 billion.

“The ever-increasing size of container ships makes it imperative that a deep draft container port [on the] West Coast of India is developed,” the government said in a statement. “Increasing containerization of cargo in the wake of the value-added manufacturing sector makes it important to prepare our port infrastructure for handling value-added import and export to facilitate manufacturing activity.”

In 2015, JNPT signed a memorandum of understanding with the Maharashtra Maritime Board (MMB), a local government entity, to handle construction of the Vadhavan project, but did not make any headway. Under that deal, JNPT was to own up to 74 percent of the joint venture, with MMB holding the remainder. The government’s latest statement did not, however, comment on the fate of that JV arrangement.

“A special purpose vehicle [SPV] will be formed with JNPT as the lead partner with equity participation equal to or more than 50 percent to implement the project,” the government said. “The SPV will develop the port infrastructure including reclamation [and] construction of breakwater, besides establishing connectivity to the hinterland. All the business activities would be undertaken under [a] [public-private-partnership] mode by private developers.”

Much of Vadhavan’s growth potential comes from two factors — a deep, natural water depth of 20 meters that can accommodate vessels of up to 25,000 TEU and a vast hinterland region stretching from the southwest to secondary markets of the northern interior.

The initial school of thought behind the new investment at Vadhavan was to prevent potential spillover volumes out of JNPT from traveling to private minor ports — such as Mundra and Pipavav — farther up the west coast, also given that JNPT would have little room for capacity expansion after the completion of PSA’s two-phase terminal development, named the Bharat Mumbai Container Terminals (BMCT).

Although project specifics are not yet known, the government is pinning high hopes on the Vadhavan plan. “With the development of Vadhavan port, India will break into the countries with top-10 container ports in the world,” it said.

But the reality of slowing demand can bite into that perceived rosy outlook, as existing terminals in the region are already caught up with unrealized opportunities to lift capacity utilization to their projected levels.

The Adani Group has considerable terminal interests in the region, with Mundra being its top container bet. However, even the pace of growth at Mundra has slowed in recent months, new data suggests. The country’s biggest non-government harbor saw overall traffic grow just 3 percent year over year in the first three quarters of fiscal 2019-20 (April-December), a far cry from the double-digit growth rates it had in the past.

Similarly, at Hazira, another Adani port location on the west coast, April-December growth moderated to 9 percent, versus 20 percent during the same period in 2018.

The company did not provide any separate data for containerized traffic. However, statistics collected by JOC.com from industry sources suggest a moderating trend here too, with Mundra’s 2019 volume through Adani-controlled terminals up just 3 percent year over year to 3.7 million TEU.

With the addition of BMCT, JNPT is well-positioned to meet expected demand in the near future — with its current combined capacity pegged at 8 million TEU annually that will increase to about 10 million TEU when BMCT begins its second-phase operations, presently targeted at the end of 2022.

But the government believes JNPT’s volume will surpass 10 million TEU by 2025 and it does not want to risk losing traffic to private ports farther up the west coast. “The demand for container traffic will further accelerate after the plans for improving logistic infrastructure fructify and the ‘Make-in-India’ push drives greater exports and manufacture sourcing to India,” it said.