Illegal payments make up half of Nigeria import-export costs

Illegal payments make up half of Nigeria import-export costs 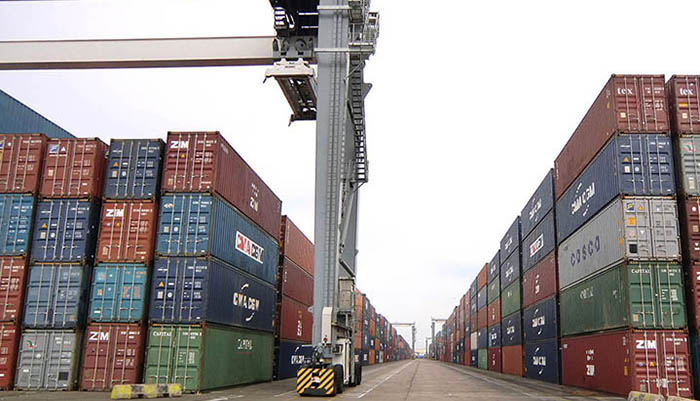 Congestion at the container terminal at Tin Can Island in Lagos, Nigeria, pictured, which occurs regularly because of space limitations, is made worse by corruption.

Illegal payments now account for more than half the cost of import and export processes through Nigeria’s ports, and delays account for up to 70 percent of the time required to import or export a container, according to a study by the Lagos Chamber of Commerce and Industry.

“Nigeria’s seaports still rank as the most expensive in West Africa. On the import side, extra costs related to yard handling fees represent an extraordinary 77 percent of the total cost, driven by longer-than-ideal border clearance times, yard handling procedures, and informal payments to customs and other government agencies,” the study said.

The involvement of too many government agencies in port operations is blamed for much of the inefficiency and illegal payments. Up to 33 different signatures can be required to handle and clear a single shipment, a situation that introduces too many opportunities for delays and chances to seek illegal payments.

“While [government ministries, departments, and agencies] and their officials are most often associated with creating artificial barriers and demanding unofficial payments for personal gain, the private sector players are not without blame,” the study notes.

Port users and their agents are blamed for what the report describes as the “supply side” of illegal payments in the form of inducements, conflicts of interest, illegal dealings, and lack of knowledge of port processes.

With a GDP of over $480 billion last year, Nigeria is Africa’s second-largest economy and regarded as one of the most promising growth engines on the continent. Trade inefficiencies severely hamstring this potential, and problems within the ports and maritime sector contribute heavily to a dismal ranking of 181 out of 190 countries in the Trading Across Borders category of the World Bank’s Ease of Doing Business survey.

Customs clearance and inspection processes for imports and exports take up to 135 hours in Nigeria compared with an Organisation for Economic Co-operation and Development average of just 12 hours for imports and three hours for exports. The cost of these processes on a per-shipment basis is an extraordinary $1,077 in the case of imports and $786 for exports, compared with the OECD average of $115 and $150, the World Bank says.

In addition to customs processes and processes related to approvals from the national food and drug administration agency, the interface with terminal operators is identified by the study as one of the primary areas where illegal payments are a problem.

“(Terminal operators) charge high fees without recourse to any regulatory approval. For now there is no clear agency in Nigeria that regulates the activities of terminal operators.”

The study calls for a comprehensive reform program with a focus on achieving shorter wait times for ships to berth, faster goods clearance, and the elimination of redundancies in the functions of government agencies at ports.

The study recommended a single window platform to reduce the number of interactions with government agencies, implementation of systems for electronic customs clearance, and development of a national trade data center are all recommended.

The number of government agencies involved in handling and clearing cargo should be reduced from 14 to a maximum of six and performance targets for agencies and their employees should be set, published, and monitored, the report says.

More private sector investment and participation in port infrastructure and operations is also identified as an important component in the drive to improve efficiency and eliminate illegal payments.

An initial effort to reform Nigeria’s maritime sector was made in the early 2000s when privatization was introduced for the first time, but the results were very limited. With the low oil price severely depleting the income of the country at the moment, there is a renewed focus on economic diversification, which has created a renewed focus on the efficiency of Nigeria’s port system.

Workers with 79 port customers, regulators, and operators responded to a semi-structured questionnaire and participated in discussion group interviews for the study. The study was funded by the Center for International Private Enterprise, a US-body focused on promoting democracy through market-oriented reform and private enterprise, and the Financial Derivatives Company, one of Nigeria’s largest financial services institutions.