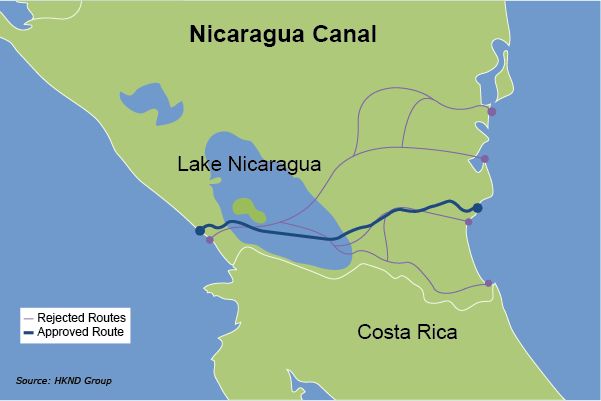 Roughly 500 Nicaraguan farmers protested against the Nicaragua Canal this week, angered that the $40 billion plan includes the seizure of their land.

“We do not want the canal to be built. Nobody should come in here and take over our land,” said Ronald Enríquez at a march in the southern town of Potosí, where participants clashed with police, according to The Tico Times.

The project, which would rival the Panama Canal by linking the Caribbean and the Pacific, was awarded to a Chinese company, HK Nicaragua Development, also known as HKND, by Nicaraguan President Daniel Ortega. The company’s controversial plan is to build a canal that will be able to accommodate the largest ships that are likely to be built up through the year 2030, or ships with capacities of up to roughly 23,000 TEUs.

Protestors chanted: “We do not want the Chinese here,” and “the police are on the side of the Chinese,” at the second such show of opposition in the Rivas department in less than a week, The Tico Times reported. Angry residents protested the canal on Sept. 19 and again on Sept. 23. The Tico Times has reported recently of Chinese engineeers surveying rural areas protected by police and military. The non-democratic process of approving the canal is in contrast to Panama which went out and sold the idea of the expansion to the country’s population and won a nationwide referendum in 2006.

The Great Inter-Oceanic Canal Commission, which is managing the project, said it would pay fair prices to landowners whose property is taken for public use, The Tico Times said.

Earlier this year, Chinese telecom tycoon Wang Jing, who owns HKND, promised that the proposed canal would create tens of thousands of jobs in Nicaragua. The country is the second-poorest country in the Western Hemisphere, behind Haiti, according to the CIA, and No. 114 in the World Economic Forum’s ranking of 144 countries’ infrastructure.

Work on the 173-mile-long canal is slated to begin in December. The proposed channel, which would measure anywhere from 754 feet to 1,706 feet wide and 90 feet deep, starts from the mouth of the Brito River on the Pacific side, passes through Lake Nicaragua, and ends in the Punto Gorda River in the Caribbean.

Challenges facing the project include exposing Lake Nicaragua, Central America’s largest source of freshwater, to the risk of salinization once it is connected to the ocean, as well as disposing of excavated dirt. Environmental impacts and potential seismic activity from nearby active volcanoes are also concerns.

Meanwhile, the Panama Canal’s third set of locks, which will accommodate post-Panamax ships, or ships with capacities of up to 13,000 TEUs, are set for completion in early 2016 after several delays. The canal authority’s administrator, Jorge Quijano, said this week that another expansion on the Panama Canal is already being envisioned within 25 years in order to further increase its capacity by building a fourth set of locks.