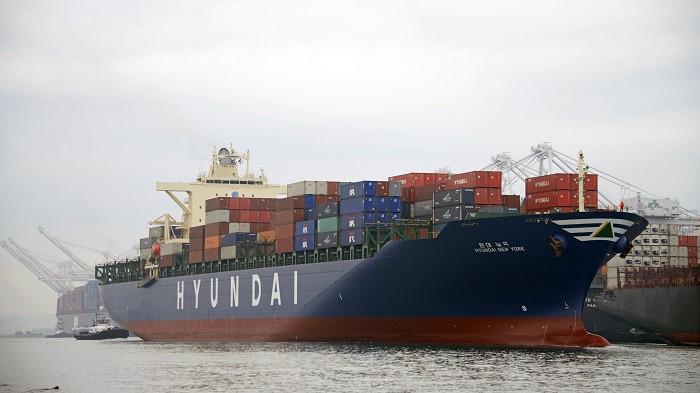 Qatar’s efforts to throw off the shackles of a more than seven-month-old boycott by Gulf Cooperation Council (GCC) neighbors continued with the launch of a service from South Korea that will also take in several southwestern China calls.

Hyundai Merchant Marine, the world’s 13th-largest shipping line, according to Alphaliner, will provide regular weekly services to the besieged Gulf nation from Kwangyang and Busan, both in South Korea, Ningbo, Kaohsiung, Yantian, Shekou, and Hong Kong in China, Singapore, and Port Klang, Malaysia.

The port said on Saturday that the first vessel on the service, 13,154 TEU Hyundai Drive, became the largest ever to dock at the facility. Qatar Ports’ Twitter feed also published a video of the vessel approaching the port.

Qatar Ports is implementing a “comprehensive plan” to expand the network of direct shipping calls to Hamad port, to ensure local market stability by eliminating intermediate ports, officials say, a veiled reference to the loss of transhipment options at the United Arab Emirates’ (UAE's) Jebel Ali and other regional ports.

“We are pleased to announce that one of the largest Asian shipping routes will begin direct [calls] to Hamad port, which will enhance the options available to customers and provide fast and guaranteed solutions to local and international import and export companies operating in the local market,” said Captain Abdul Aziz Al Yafei, Hamad port’s general manager.

“The new service is characterized by transit times that will reduce the time taken for the arrival of goods and reduce the cost to users of the port.”

In August, the 8,400 TEU Maersk Taurus became the largest vessel at the time to dock at Hamad port.

QTerminals is a terminal operating company jointly set up by Qatar Ports Management Company and Qatar Navigation, which own 51% and 49% of the entity, respectively.

According to HMM Japan, Hyundai Drive is next expected to call at Hamad port on March 1, 2018. Although transshipment services to Qatar will probably be unavailable, the service will also call the Gulf ports of Bandar Abbas, Jebel Ali, Dammam, and Abu Dhabi’s Khalifa Port Container Terminal.

A group of Arab nations, including GCC members Saudi Arabia, the UAE, and Bahrain, as well as Egypt, launched a boycott of Qatar on June 5, 2017, in protest of what they termed "Qatar’s terrorist links."