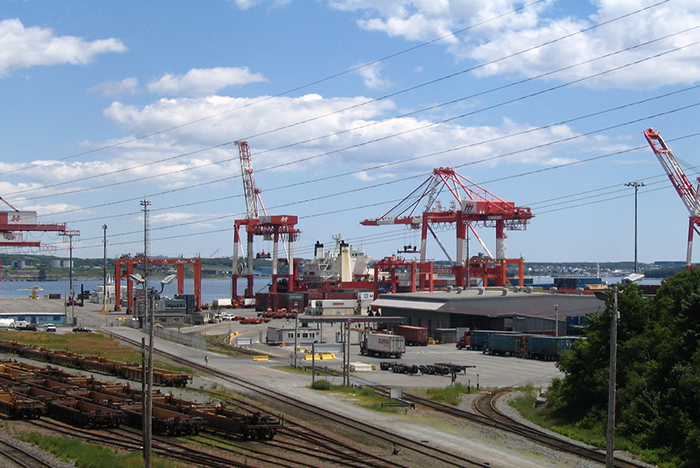 Port of Halifax’s recent inclusion on G6 and CMA CGM services to Asia bode well for a container rebound at the Nova Scotia gateway.

These new services, along with an expectation that Halifax will be included on another Asian service via the Suez Canal, suggest that the port is “climbing out of a downward containerized cargo cycle, which started in the first quarter 2014 and carried through first quarter 2015,” Halifax Port Authority spokesman Lane Farguson said  Container traffic through the port fell 7 percent year-over-year to 107,606 twenty-foot equivalent units in the first half, according to port authority statistics.

CMA CGM’s Columbus Loop will make its first Halifax call August 3, giving the port direct service between South China, Vietnam and Malaysia, according to a notice to customers from the French carrier. CMA CMA said the vessels through the service — all with capacities of at least 8,460 TEUs — will be the largest ships to call the east coast of Canada.

With a 52.5 foot draft, the deepest on the east coast of North America,  Halifax can handle vessels with capacities of up to 16,000 TEUs, Farguson said in an email. The largest vessels calling Halifax are in the 7,500-TEU range.

Earlier this month, the G6 Alliance said it would add Halifax to its Asia-U.S. East Coast service, giving shippers better transit times from Canada to Asian and Mediterranean ports as well as from Asian and Mediterranean ports to New York. The G6 — APL, Hapag-Lloyd, Hyundai Merchant Marine, Mitsui O.S.K. Lines, NYK and OOCL — are expected to deploy vessels in the 8,200 to 8,700 TEU range via the AZX (Asia Suez Express) service, Farguson said.

Including the new services, Halifax will have four Asian services calling by mid-August.