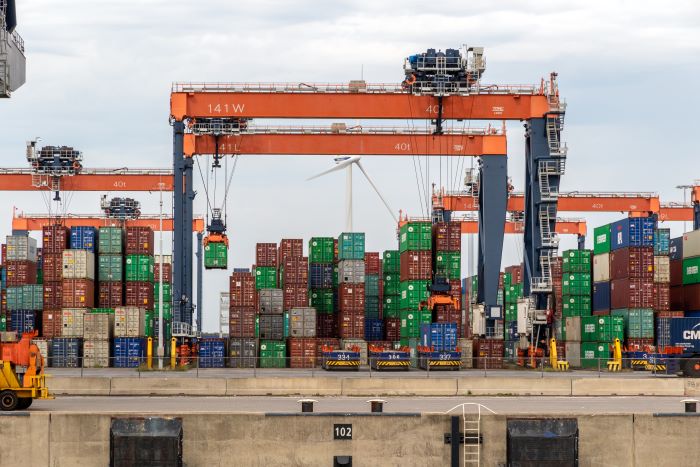 Rotterdam (above) attributed its lukewarm volume growth in 2019 to weakening European economies and slowing trade with Asia. Photo credit: Shutterstock.com.

Cargo growth at Europe's largest container port of Rotterdam slowed in 2019 amid increased competition from rivals Antwerp and Hamburg.

Hamburg’s full-year volume has not yet been reported, but in the first nine months of 2019, the port handled 7 million TEU, an increase of almost 7 percent, according to port authority figures.

Rotterdam, whose first-half volume was up 6.4 percent before a poor second half kicked in, attributed its overall lukewarm volume growth to weakening European economies and slowing trade with Asia, combined with only a marginal increase in transshipment. The port said in a statement that reduced industrial production in Germany and slower growth in world trade led to shipments from Asia being canceled in November and December. The short-sea segment was affected by lower regional economic growth and competition from other ports.

Faced with growing regional competition, Rotterdam has been investing heavily in port and rail infrastructure to improve its leading position in Europe, according to Allard Castelein, Port of Rotterdam Authority CEO. A total of $367 million was invested in 2019, down from $443 million the year prior. The port said significant progress has been made over the past year with digitization, in particular through the launch of PortXchange, an app that makes port calls more efficient and helps clients reduce emissions.

“The success of a modern port cannot be measured by throughput tonnage alone,” Castelein said. “Our customers no longer just want increased throughput capacity, but demand a better, faster and, above all, smarter port.”

Hamburg has lagged its two larger rivals for the last few years but is likely to have narrowed the gap in 2019. The port’s volume has been boosted by the relocation of trans-Atlantic operations of THE Alliance — Hapag-Lloyd, Yang Ming, and Ocean Network Express (ONE) — from Bremerhaven to Hamburg, a move that Alphaliner estimated early last year could add about 500,000 TEU to Hamburg’s annual volume.

Supporting prospects for further volume growth through 2020 is the expansion of Hamburg’s Elbe River access, where the waterway has been widened at crucial points to enable greater numbers of ultra-large container ships to call the port.

In addition to the widening of the river, dredging operations on the Elbe began last July to deepen the fairway and add one extra meter of draft, allowing container ships to carry about 1,800 more TEU per call, irrespective of the tide. Once the project is complete, loaded vessels will be able to leave Hamburg with a draft of 13.5 meters (44 feet) during low tide and 14.5 meters during high tide.

The economic slowdown in Europe was highlighted by Nariman Behravesh, chief economist at IHS Markit, parent company of JOC.com, in his latest update. Behravesh said the low European economic growth rate in the fourth quarter of 2019 played a role in limiting his forecast of annual growth in 2020 to just 0.9 percent.

With real gross domestic product (GDP) increasing just 0.1 percent quarter on quarter in the final three months of 2019, Behravesh said that was the continent’s weakest performance since the first quarter of 2013. IHS Markit data shows economic growth in Europe was 1.2 percent in 2019, down from 1.9 percent in 2018.