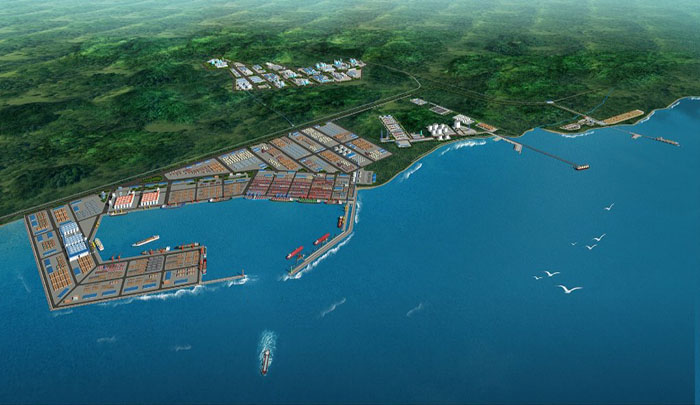 An artist's rendering of the completed Kribi port.

Construction work is set to commence on the second phase of the only deep-sea port in central Africa at Kribi, Cameroon after a second round of financing was arranged with the Export-Import Bank of China.

The second phase of the project will cost $675.5 million and consist of two container berths, two bulk cargo berths and two hydrocarbon berths. When complete at the beginning of 2020, there will be 20 terminals along a total quay length of 6.5 kilometers (4 miles).

The new port is expected to effectively replace the existing Port of Douala, which lies 150 kilometers to the north of Kribi. An estuary port that requires constant dredging and with a draft of just 7 meters, Douala handles the vast majority of Cameroon’s seaborne trade, but is notoriously inefficient and regarded as one of the worst commercial ports in Africa.

Average cargo dwell time — defined as the time from vessel arrival to the exit of the cargo from the port — is 22 days at Douala, according the World Bank. The lengthy dwell time is in part due to the fact that small ferries are used to carry in goods from vessels larger than 15,000 deadweight tonnage that cannot berth at the shallow port. With a 16-meter draught, the new port at Kribi will be capable of handling vessels up to 100,000 dwt.

The first phase of the development at Kribi cost $498 million and consists of a 120-meter breakwater, a 362-meter container berth and a 308-meter general cargo berth. The two berths can handle vessels up to 50,000 and 40,000 dwt, respectively. Funding for the first phase was provided by the Exim Bank of China and construction works carried out by China Harbor Engineering Corporation.

For phase two, the bank is providing part of the funds on a concessional loan basis and part as a preferential loan. There is an interest free grace period of seven years after which interest is expected to be as low as 2 percent annually. The loan will mature in 20 years.

A third phase is planned, which will see 12 new berths constructed in the northern part of the port complex.

A consortium led by France’s Bollore group and comprising CMA CGM and CHEC was awarded a 25-year concession to develop and operate a container terminal at Kribi on 700 meters of quay with a 32-hectare (79 acres) yard and an annual capacity of 1.4 million 20-foot-equivalent units. Bollore Africa Logistics currently operates the container terminal at Douala, the Douala International Terminal, as a subsidiary.

Cameroon is the second-largest economy in central Africa after the Democratic Republic of Congo. As well as the local economy, the port is expected to become a regional transport hub for Atlantic coast countries from Senegal to Gabon and neighboring landlocked countries such as Chad and the Central African Republic.

The new port is expected to boost Cameroon’s mining sector, with a new 510-kilometer rail link being constructed between the port and the iron ore producing area of Mbalam in the east of the country. Mota-Engil SGPS, a Portuguese construction company, was awarded the contract to build the railway line together with an iron ore berth at the port.