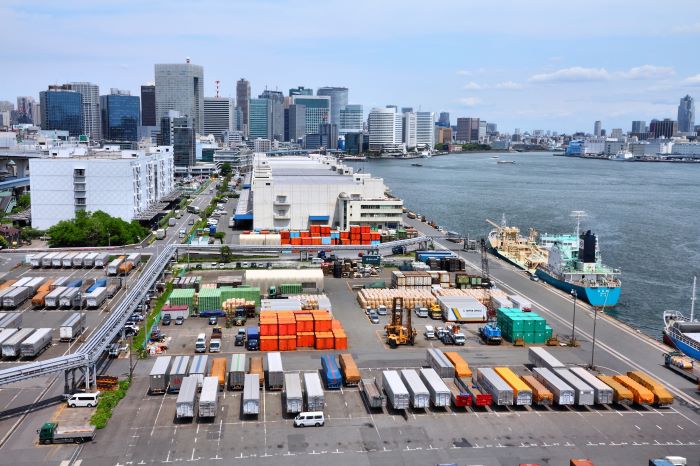 Most berths in Tokyo have lengths of 300–350 m, meaning rearrangements are necessary when ULCCs are calling at the same time. Photo credit: Shutterstock.com.

The problem has led carriers to alter port rotations to avoid vessels bunching together, with some box ships being forced to depart earlier than planned to prevent delays and congestion.

Only one of Tokyo’s existing berths, the Y2 facility with a single 400-m-long (1,312 ft) berth, is capable of handling vessels of more than 14,000 TEU. A consortium that includes Mitsui-Soko and freight forwarder Nippon Express opened the Y2 terminal in April.

As a result, they can handle ships up to around 8,000 TEU. However, the deployment of larger ships on Asia-Europe and trans-Pacific services means ultra-large container carriers (ULCCs) frequently take up two berths.

“The issue we see is the increasing number of vessels with an overall length of 350 m or more calling at Japan ports,” Nils Meier, Hapag-Lloyd managing director in Japan, told JOC.com. “In Tokyo most berths have lengths of 300–350 m and often a number of rearrangements have to be done when ultra-large container vessels are calling at the same time.”

The issue has exacerbated a shortage of container storage space at terminals in Tokyo.

“The new Y2 terminal in Tokyo is helping to relieve the situation as it has a berth length of 400 m and is also providing additional storage space,” Meier said.

“Hapag-Lloyd is less affected because we only have a few of our own vessels calling Japan and the majority of vessels are provided by our partners,” he added.

However, Ocean Network Express is often changing the rotation of vessel calls at Tokyo, Yokohama, and Shimizu to avoid delays and bunching vessels together. ONE is also advancing the departure of ships calling at Tokyo and Nagoya by at least a day to avoid delays.

That comes even as congestion at Tokyo has not worsened as much as first feared because the cancelation of the Tokyo Summer Olympics owing to the COVID-19 pandemic reduced pressure on cargo volumes, especially imports.

“Fortunately, port congestion did not develop as expected so the situation remains tight but manageable,” Meier said. “In general, the tight storage space in Tokyo terminals is the main driver behind the congestion along with the trucker shortage.”

Turloch Mooney, IHS Markit associate director, told JOC.com that similar levels of berth productivity were recorded for vessels under 10,000 TEU calling at Tokyo and Yokohama in the first half of 2020 compared with the same period in 2019. However, for vessels of 10,000 TEU and larger, average berth moves per hour in Tokyo was almost a third lower than Yokohama and Tokyo’s own performance in the smaller vessel size classes in the same period.

Global Shipping Outlook: A Sneak Peek at 2021
Port Performance North America: Managing Cargo Flow During a Pandemic — and Beyond
END_OF_DOCUMENT_TOKEN_TO_BE_REPLACED