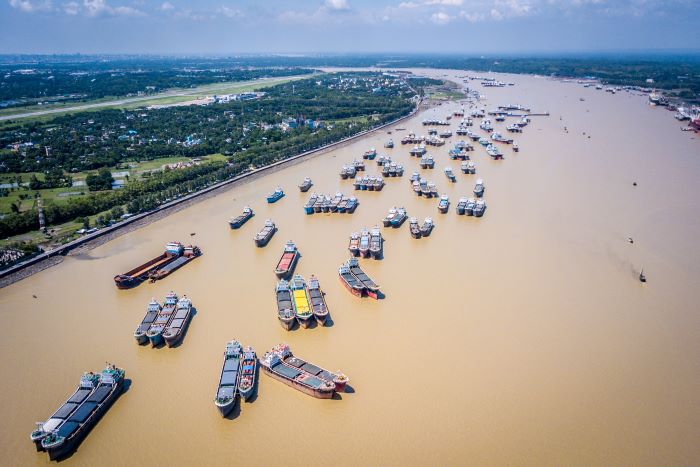 Chittagong has the capacity to store a total of 49,018 TEU of containers, but that number has been surpassed during the lockdown. Photo credit: Shutterstock.com.

Bangladeshi customs authorities on Thursday said they will allow containers laden with all types of goods to be shifted to private off-docks in order to free up space at the heavily congested Port of Chittagong.

Previously, customs had restricted the types of cargoes that could be moved off-dock. But a request from the Shipping Ministry to relax those rules amid growing pressure to relieve port congestion at Chittagong prompted authorities to reconsider.

Port officials say the new initiative will allow more than 18,000 TEU of containers to move to off-dock space.

“In this crisis moment, the government needs to relax rules as much as possible,” said Mohammad Hatem, vice president of the Bangladesh Knitwear Manufacturers and Exporters Association (BGMEA).

Containers have piled up in recent weeks at Chittagong amid Bangladesh’s lockdown to mitigate the spread of the coronavirus disease 2019 (COVID-19).

Chittagong has the capacity to store a total of 49,018 TEU of containers, but that number has been surpassed during the lockdown. The yard is overflowing with import containers, almost halting the loading and unloading of containers. Some 34 vessels lined up on Wednesday in the outer anchorage and eight were struggling to unload containers due to the dearth of free space.

The average turnaround time for ships has surpassed 16 days. A Yang Ming vessel took a berth on Monday, but as of Tuesday evening it could unload only 43 TEU of containers due to a rationing system for delivering boxes.

Siddiqur Rahman, vice president of the Federation of Bangladesh Chambers of Commerce and Industry (FBCCI), said the port congestion would not ease until factories are reopened. “Taking delivery of containers is linked to a smooth supply system — the customs, banks, C&F agents, testing organizations, transports, and importers themselves,” he told JOC.com.

Meanwhile, the government on Tuesday revoked a waiver it had granted on storage rent in a bid to apply pressure on importers because the move had not helped ease container congestion at Chittagong.