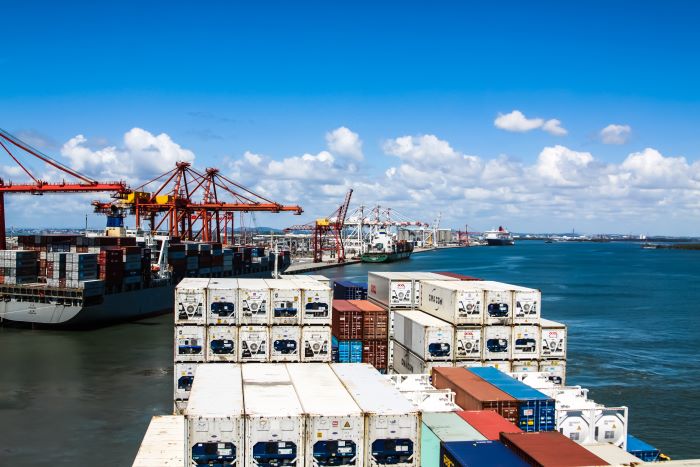 Maritime union leaders said workers would be embarking on a new campaign of industrial action after DP World Australia canceled some vacation leave and banned workers, including at the Port of Brisbane (above), from meeting union representatives on company property. Photo credit: Shutterstock.com.

Paul Zalai, director of both the Australian Peak Shippers Association (APSA) and Freight & Trade Alliance (FTA), said the combination of industrial action and higher charges “leaves a bitter taste for industry.” Charges at some terminals have soared by nearly 50 percent.

“There was little advanced notice of the industrial action that now appears to be spreading nationally to all DP World terminals,” Zalai said. The terminals are located in Sydney, Melbourne, Brisbane, and Fremantle.

“The real threat would be in the event that this escalates, will competing stevedores take vessels on a sub-contracted basis or will the unions also ban work there too?,” he added.

Maritime union leaders on Monday said workers would be embarking on a new campaign of industrial action after DP World Australia canceled previously approved vacation leave and banned workers from meeting union representatives on company property. The move is part of a simmering 15-month dispute between dock workers and DP World over a new labor agreement.

The Maritime Union of Australia (MUA) described the action employed by DP World “as an unlawful and aggressive attack on workers’ rights.” DP World employs about 1,800 dock workers at the four terminals, making it the largest stevedore in Australia.

“Rather than backing down, workers will be responding to this latest attack with a fresh round of industrial action, including strikes, rolling stoppages during each shift, and the imposition of a range of work bans,” MUA assistant national secretary Warren Smith said.

Smith said during negotiations with DP World, the terminal operator had sought to intimidate workers with threats over workers’ family and social benefits, such as income protection. “We’ve seen dockings [of pay], actual sackings, threats of mass sackings, leave canceled, attacks on democratic rights, and cancelation of Christmas bonuses,” he said.

DP World confirmed that employees with operational and engineering skills have had their leave canceled amid a worker shortage. The port operator also docked the pay of workers in Sydney who refused to work outside when smoke from bushfires engulfed the city last month.

The action this week came after a 24-hour strike by about 200 dockers at the DP World container terminal in Fremantle last week to pressure the company to agree to a new workplace pact.

Zalai said the industrial action is coming on the back of “massive increases in terminal access charges” from January 1.

At Sydney’s Port Botany, the access charge, levied on all containers received or delivered by road or rail, has risen by almost 50 percent to A$91 (US$62) from A$63.80 from last year, DP World said. At Fremantle, the terminal fee has risen to A$45 per container.

“It was not unreasonable to expect that the increase in fees would be commensurate with an improvement in service delivery,” Zalai said.

“This will add further cost to importers with continued and drastic increases from the commencement of this levy over the past number of years,” Australian Logistics firm BR International Logistics said.

The fresh increases come as infrastructure charges at Australia’s container terminals surged more than 60 percent between 2018-19, prompting shipper groups to call for state and federal government caps on fee levels.

Global Shipping Outlook: A Sneak Peek at 2021
Port Performance North America: Managing Cargo Flow During a Pandemic — and Beyond
END_OF_DOCUMENT_TOKEN_TO_BE_REPLACED