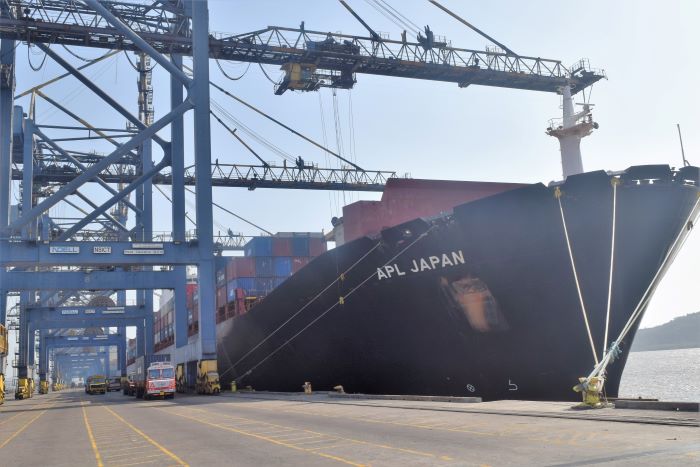 In a significant breakthrough for India’s digital transformation in supply chains, Abu Dhabi Ports (ADP) has agreed to become the first global partner for an online port community system India has been developing into a single-window logistics experience.

The redesigned module — dubbed PCS1x — went live in December 2018, with the implementation task assigned to the Indian Ports Association (IPA) along with its technical services provider Portall Infosystems. Indian stakeholders have been exploring ways to further enhance the functional reach and competitiveness of the collaborative platform, where the intended global tie-up promises high potential.

The move follows an approach made by IPA to ADP for country-to-country collaboration by linking the PCS1x with the latter’s “Maqta Gateway.” ADP set up its digital tool in 2016 to provide more value to customers using its flagship Khalifa Port that began operations in 2012.

Industry sources told JOC.com ADP officials will soon initiate talks with Indian counterparts to draw up a roadmap for establishing integration links. Efforts to reach Portall for comment were unsuccessful.

Upon integration, exporters and importers at both ends could have broader logistics tools providing in-transit visibility and access to instant freight pricing within a one-stop shop. The fact that Khalifa has lately become a major transshipment point for Indian cargo raises the bar even higher on shipper expectations.

“PCS1x has, in fact, transformed the entire landscape of logistics in India, paving new paths for the maritime industry to march ahead in less than a year since its launch,” Portall said in a recent statement to JOC.com. “The benefits of PCS1x in Indian trade are too great for stakeholders to ignore.”

Thanks to country-wide roadshow presentations and other outreach efforts, industry participation in the Indian PCS network has increased considerably in recent months. At a recent review meeting, intermodal rail operator Container Corporation of India (Concor) said it is readying to join the PCS network, having completed adequate pilot runs.  Stakeholders at the session also considered extending PCS functional capabilities to other general, non-containerized cargoes such as breakbulk, liquid, and roll-on, roll-off (ro-ro) movement, sources said.

Although a lot has been achieved in a vastly complex market, data integration between Indian Customs’ gateway (ICEGATE) and the PCS1x can prove to be a daunting task for stakeholders, more because a new customs regulation meant to tighten cargo manifest filings is in the offing.

Maersk, the largest container carrier to and from India, believes the PCS application will have a transformational impact on Indian supply chains if the network is made as comprehensive and holistic as possible.

“There is a need to get PCS established in such a way that it can link to other international trade networks, such as TradeLens, to enable the exchange of information globally and also within a port/airport ecosystem,” the carrier told JOC.com. “This system is helping in digitizing the process of documentation, thereby ensuring transparency, avoiding error-prone transactions, improving efficiency and, above all, reducing labor costs by diminishing the need for manual labor."

TradeLens is the global trade blockchain platform developed by Maersk and IBM.