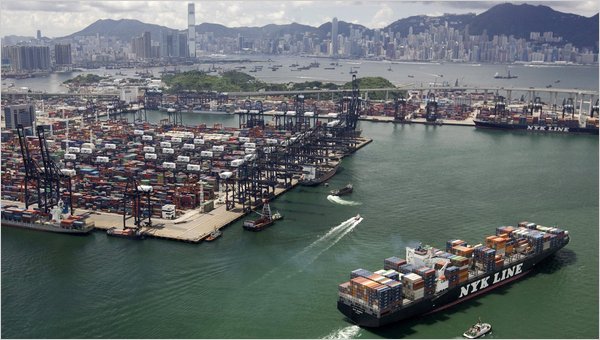 Government inaction continues to hurt the current and future prospects of the Port of Hong Kong, pictured.

Hong Kong’s container throughput fell 10.5 percent in the first six months of 2016 compared with the same period in 2015, continuing a steady decline that has seen the terminals registering volume declines every month since July 2014.

The container terminals, midstream and river trade volume registered 9.16 million 20-foot-equivalent units from January to June, with June volume dropping 8.6 percent to 1.6 million TEUs. While river trade and the midstream contribute to Hong Kong’s throughput, most of the city’s volume is from the container terminals at Kwai Chung that handled 7.24 million boxes in the first six months, down 9.2 percent year on year.

First-half volume at the world’s second-busiest container port of Singapore was also down, falling 5 percent to 15.9 million TEUs. June volume recorded flat 0.8 percent growth, although that was down 2.6 percent from the boxes tallied in May.

A large part of Hong Kong’s port decline can be laid at the unwillingness of the government to address its failings over more than a decade — insufficient back-up land at the terminals, cost and delays of bringing containers across the border from China factories, inability of Chinese truckers to drive in Hong Kong — with container lines' unwillingness to reduce terminal handling charges, making the port more expensive than the Shenzhen alternatives.

The Hong Kong government is finally taking measures to increase back-up land at the terminal and is providing additional barge berths, but the measures come far too late to stop what appears to be a slow but terminal decline.

In a bid to address the many challenges, the old Maritime Industry Council and the Port Development Council have combined to form the Hong Kong Maritime & Port Board that will be chaired by the Secretary for Transport and Housing. It is a step in the right direction, although the insistence of including the housing portfolio with transport continues to baffle the industry.

However, Hong Kong's port woes are not exclusively of its own making. Also affecting throughput is China’s economic slowdown that has caused the mainland’s exports to fall almost 7.7 percent in the first six months and imports to drop 10.2 percent. This can be seen clearly at ports in the mainland’s two major export producing areas, the Yangtze River and Pearl River deltas.

Figures released by Cosco Pacific, China’s second-largest port operator, show that its extensive network of terminals in the YRD recorded a 5.4 percent decline in throughput from January to June, handling 4.7 million TEUs. Total throughput in the region has fallen every month in 2016 with Ningbo Yuan Dong Terminals recording the sharpest drop, down 34 percent for the first six months.

In the PRD, the first-half throughput fell 3.4 percent to 6 million TEUs. Yantian International Container Terminals is the busiest facility in the PRD and ended the six months down 1 percent compared with the same period in 2015, but Hong Kong’s struggles were clearly illustrated by the drop in volumes crossing the wharves of the Cosco-HIT joint venture terminal. Its 365,000 TEUs was down 17 percent versus the first six months of 2015 and the terminal has shown strong double-digit-percentage declines every month this year, led by a 33 percent plunge in February.

The Bohai Rim ports of Northern China as a region handle the biggest share of Cosco Pacific container volume and the first half throughput was up 5.4 percent to 8.3 million TEUs.

How to Improve OTIF: 15 Tips for On Time and In Full Delivery
END_OF_DOCUMENT_TOKEN_TO_BE_REPLACED