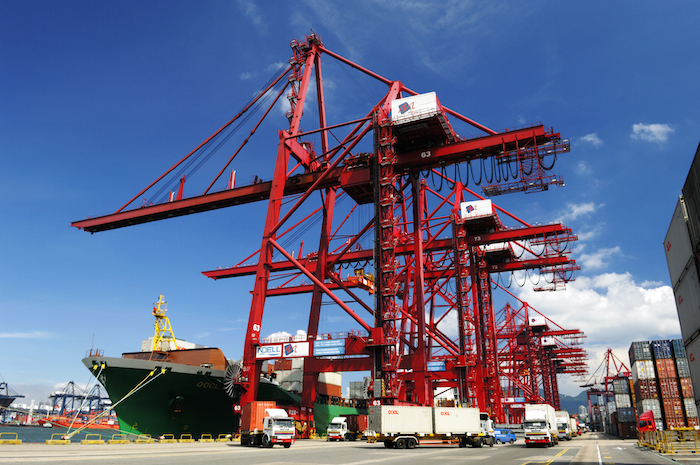 It is the seventh straight month of declining growth at the port’s Kwai Tsing container terminals that began in August last year. The largest decline was in December when the port throughput was down 12 percent year-over-year, and while the overall traffic fell in January by 6.1 percent, the container terminals segment of the port saw volumes fall by 8.6 percent.

Port congestion last year was a contributing factor to the falling throughput, as larger ships discharging greater volume surges overwhelmed a port that was constructed years back when 18,000 TEU ships were mere science fiction. The mega alliances have also introduced additional complexity into handling containers, with thousands of inter-terminal truck moves required to reposition incoming boxes to alliance members and feeder operators.

However, there is also a trend toward the port being bypassed as shippers of South China cargo send their goods out via the neighboring Shenzhen terminals, especially Hutchison-run Yantian International Container Terminals. This trend has seen Hong Kong being transformed into a transshipment port, with more than 70 percent of its throughput now comprising containers in transit.

Transshipment cargo has less economic value to a port than direct exports, and the containers are double counted, so greater volume of these boxes does not necessarily mean greater revenue.

This also leaves the port in a situation where throughput is declining in the very area where boxes are counted twice.

Throughput in 2014 was 22.2 million TEUs, just 82,000 TEUs less than in 2013, but it was the lowest volume handled by Hong Kong since 2009 when the financial crisis dropped anchors on international trade.

The difference between Singapore and Hong Kong is that the city-state has always been a transshipment hub. It lost its place at the top of the busiest container port list several years ago to Shanghai, but continues to show steady growth.

In January the port’s terminals, mainly operated by PSA, reported a 3.6 percent increase in container throughput, handling 2.78 million TEUs during the month, up from 2.69 million boxes in January last year.