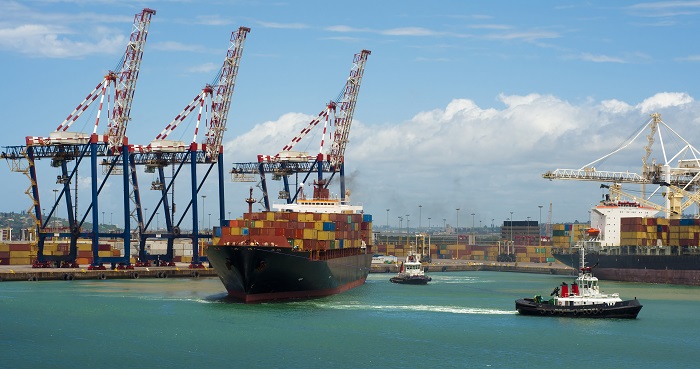 In the PwC report, the consultants noted that although individual countries in Africa have tended to push for developing their own hub ports, it was likely that only some ports would eventually emerge as major hubs. Above: The Port of Durban. Photo credit: Shutterstock.com.

Container volumes are forecast to grow in most African markets by as much as 8 percent this year, continuing the solid growth of 2017, but worsening the congestion already choking ports and hinterland connections across the continent.

An urgent need for investment in infrastructure at ports and terminals and on the landside has been highlighted by ocean carriers and terminal operators, with a new research report by PwC on strengthening Africa’s gateways to trade predicting that the many gateways currently in operation will be consolidated to two or three main hubs.

After three lean years of flat or declining volume, Europe trade is bouncing back. The latest data from Container Trades Statistics show that in 2017, Europe-Africa trade rose 6 percent to 1.9 million TEU. Traffic in January rose 9.1 percent, and traffic in February rose 10.2 percent, compared with the same months the previous year.

Hapag-Lloyd expects Africa’s volume to grow by 6 to 8 percent in 2018, but a spokesperson for the Hamburg-based carrier said the pace of investment in ports and inland logistics was slower than the actual growth of Africa’s container throughput. “Port and hinterland infrastructure is already suffering under congestion and limitations and will be struggling even more in future, particularly when the volume growth materializes as forecasted,” the carrier told JOC.com.

“Governments, port authorities, and logistic companies have identified the urgent need for further investment in the infrastructure and the requirement to implement new and more efficient processes. This gap needs to be closed in the coming years.”

In the PwC report, the consultants noted that although individual countries in Africa have tended to push for developing their own hub ports, it was likely that only some ports would eventually emerge as major hubs.

“PwC’s analysis shows that, based on the degree of shipping liner connectivity, amount of trade passing through a port, and the size of the hinterland, Durban (South Africa), Abidjan (Côte d’Ivoire) and Mombasa (Kenya) are most likely to emerge as the major hubs in Southern Africa, West Africa and East Africa, respectively,” the report stated.

PwC said there was a close relationship between port effectiveness and trade competitiveness, and governments and key stakeholders should see ports as facilitators of trade and integrators in the logistics supply chain.

Andrew Shaw, PwC Africa transport and logistics leader, said ports were a vital part of the supply chain in Africa, many with a far-reaching hinterland spanning a number of countries, making them a natural focus for regional development.

“The global transportation and logistics industry can no longer afford to ignore developments in Africa,” he wrote in the report. “Logistics service providers and ports in particular will continue to play a key facilitator role in trade competitiveness and thus facilitate trade and sustained economic growth across the region. Efficient ports can make countries and regions more competitive and thus improve their growth prospects. The reliability and efficiency of each port terminal, including minimizing delay to shippers, is critical to enhancing future trade facilitation.”

The report found that high port logistics costs, poor reliability, and low economies of scale in trade volumes had a negative impact on trade growth in Africa. According to PwC estimates, $2.2 billion per year could be saved in logistics costs if the average throughput at the major ports in sub-Saharan Africa doubled. In other parts of the world, such a focus on volume and efficiency has led to a stronger emphasis on hub and feeder ports for containers and enhancing scale for commodity bulk terminals.

It is not only the Europe-Africa trade that is growing strongly. After two months of 2018, head haul shipments in the Asia-Africa trade were up by a staggering 27 percent to 132,000 TEU, according to Drewry Shipping Consultants's latest Container Insight Weekly. The analyst said the rolling 12-month average returned a rate of 10.5 percent in February.

But rising container volume through Africa’s ports will only bring worsening congestion unless there is a huge effort to build up the landside links connecting the hinterlands to the container terminals. This is something DP World understands and has been aggressively building its African footprint. Recently the global terminal operator won a $350 million, 30-year concession at the greenfield port of Banana in the Democratic Republic of Congo.

Construction will begin later in 2018 and will take 24 months to complete. The project's total cost will be more than $1 billion and it will comprise four phases, depending on market demand for the port, and industrial and logistics zone infrastructure.

Sultan Ahmed Bin Sulayem, DP World group chairman and chief executive officer, said investment in the deepwater port would have a major impact on the country’s trade, with significant cost and time savings; it will also attract more direct calls from larger vessels from Asia and Europe, and ultimately act as a catalyst for the growth of the country and the region’s economy.

“DP World has become a major player in Africa and the Port of Banana will contribute to our global network and continued growth in the developing markets.”

Carl Lorenz, head of Africa inland at Maersk Line, said the carrier and its Safmarine service provide inland solutions and were active in all markets as an extension to the ocean product, offering local haulage within a port city, haulage within the port country, and cross-border haulage to and from landlocked countries across Africa.

“Looking at the large volumes moved at the ports, we see increased demand from customers for more flexible and end-to-end solutions to transport cargo and deliver quickly to the market,” Lorenz said. “We have expanded our inland footprint and services connecting ocean ports to the hinterland markets by train, truck, or barge to provide customers increased access to inland Africa.”