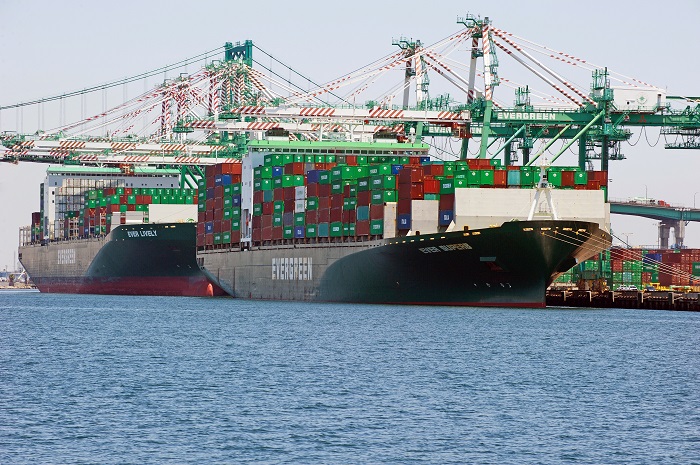 In 2017, marine terminals continued to struggle with the demands presented by larger ships, but implied in that are several encouraging statistics regarding the condition of global trade. (Above: Container ships at the Port of Los Angeles.) Photo credit: Shutterstock.com.

Global port productivity fell further in 2017, indicating that container terminals continue to be challenged by larger ships and their higher number of boxes exchanged on calls.

Data from the JOC Port Productivity Database show a 3 percent average drop in weighted port productivity globally in 2017 compared with 2016. Port productivity is defined as the number of container moves per hour of time spent by vessels in port.

Since the quantity of boxes exchanged on a single call is a key determinant of how many cranes a terminal will deploy on a vessel, the port productivity metric is weighted for call size to allow for a more apples-to-apples comparison of productivity performance.

Most world regions saw a decline in port productivity in 2017 but, at 12 percent, the decline was steepest in Africa. This is bleak news for the continent, where container volumes are expected to grow by around 8 percent this year and ocean carriers and terminal operators have been calling for urgent investment in port infrastructure.

Port productivity also declined sharply in Latin America and the Middle East/India in 2017, by 8 percent and 7 percent, respectively. There was a 3 percent fall in the number of container moves per hour of time spent by vessels in port in both northern Europe and North America.

“Southeast Asia was only region where port productivity increased at a higher rate than call size for a relative net 1 percent improvement,” said Singapore-based port productivity expert Andy Lane, who carried out the analysis of the data for IHS Markit and JOC.com.

Among major ports, the biggest declines in port productivity were recorded at Manila, negative 21 percent; and Dalian, China, and Laem Chabang in Bangkok, Thailand, both negative 16 percent. Ports that improved productivity in 2017 include Long Beach, California, 16 percent and Chiwan, China, 19 percent.

The data show that call sizes — the average number of boxes exchanged per call — increased by an average of 9 percent globally in 2017 compared with the previous year. The JOC Port Productivity Database for 2017 includes more than 215 million moves at 798 terminals in 451 ports, representing around 54 percent of global moves.

Ports in northern Europe had the biggest increase in average call size to 1,362 boxes, 20 percent higher compared with 2016. Ports in Southeast Asia and Latin America also experienced a substantial growth in average call sizes last year, to 1,220 and 890, respectively — both good for 11 percent growth rates.

While the number of moves per total hours spent by vessels in port declined, the data show a decrease in the amount of time vessels waited for berth allocation by an average of 12 minutes per call, or 6 percent, on a global level.

“The north European ports collectively reduced this time by 1.3 hours. In Africa, a 20-minute increase occurred. The Middle East and India also showed a deterioration on this metric with vessels in the region waiting around 5 percent longer to get onto berth than in 2016,” Lane said.

The world’s 30 largest ports reduced port-to-berth time by 24 minutes on average. Top improvers were Antwerp and Hamburg. Manila and Shekou were the worst performers, compared with 2016, with wait time rising substantially, by 131 percent and 43 percent, respectively.

The data show that major global transhipment hubs are relatively even in terms of the amount of wait time vessels expend before getting access to berths. Average wait time at Jebel Ali in Dubai was 2.7 hours in 2017, while Hong Kong, Busan, and Singapore all averaged around 2.4 hours.

Elsewhere in Southeast Asia, the Port of Tanjung Pelepas and Port Klang in Malaysia showed their competitiveness with Singapore, with wait times of 2.2 hours and 2.4 hours, respectively. Average wait time at Tanjung Priok in Jakarta also was 2.4 hours, indicating government moves to reduce port congestion may be taking effect.

Tanjung Priok — which won a direct trans-Pacific call when the alliances were reset one year ago — has had significant problems with congestion in the past, although much of the problem is related to poor landside infrastructure. The government has taken a series of measures to reduce total cargo dwell times, which are longer than at most other major ports in Southeast Asia and can be up to twice as long as some, such as Port Klang in Malaysia and Laem Chabang in Thailand.

As expected, the average size of ships in the global fleet continued to grow in 2017, increasing by almost 3 percent. Average container ship capacity increased by the largest percentage in northern Europe, 8 percent; followed by Latin America, 6.8 percent; the Middle East/India, 6.2 percent; and Southeast Asia, 5.1 percent.