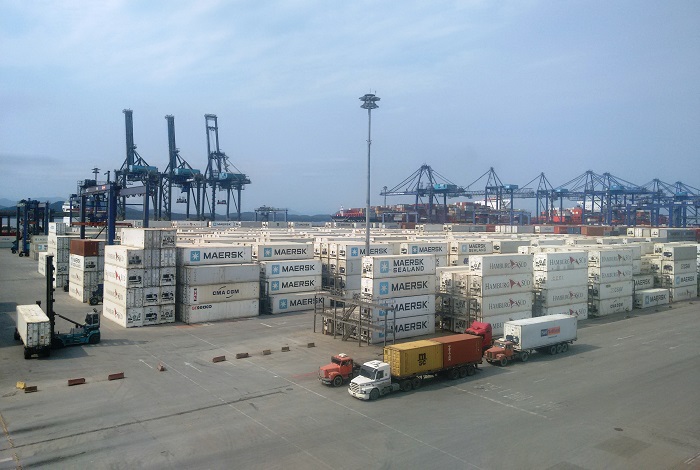 Reefer containers at the Port of Paranagua, one of the main gateways for chicken and pork exports. Photo credit: Terminal de Containeres de Paranagua.

The outlook for Brazilian container trade has been darkening in recent months, but there are signs of a 2019 export rally to offset import weakness.

Import growth in the third quarter was the slowest in two years, and outbound spot rates are falling amid muted holiday retail expectations, uncertainty over the incoming president, and mounting export concern about container availability. However, exports have been stable and could help fuel a broader economic recovery under President-Elect Jair Bolsonaro, who takes office in January.

The slowing of import growth is worrying exporters who have already seen refrigerated capacity decommissioned to handle imports of fertilizer. When imports and exports are strong, there can be 1,000 inbound containers available weekly to match up to the roughly 5,000 outbound refrigerated containers, according to Maersk. A bumper cotton crop, driving exports up 9 percent in the third quarter, only added to the pressure.

“Import volumes need to increase to fill up underutilized ships returning to Brazil. Once this happens and a balance is reached between imports and exports again, Maersk will start to look at adding capacity,” concluded the third quarter report.

Brazilian imports of machinery, appliances, and electronics were flat, at 59,100 TEU, in the third quarter, according to Datamar, a shipping data provider. Imports of pulp and paper as well as plastic and rubber fell 17 percent and 3 percent to 9,400 and 51,500 TEU, respectively, in the same period. Chemical imports jumped 14 percent, to 65,568 TEU, while metals, mining, and construction imports expanded 15 percent to 49,994 TEU.

“We had been struggling with recession — in both Manaus and Brazil — for the past three years and although there was a brief surge at the start of the year electronics nose-dived after the World Cup,” said Ramesh Thadani, the business ventures manager for Grupo Simoes, a Manaus-based logistics company for beverage, gas, and vehicle companies.

Brazilian imports of electronics fell 9 percent, to 32,700 TEU, in the third quarter compared with the same period in 2017, according to the Maersk report. Expectations for total import growth were higher after they rose 15 percent in the first half, aided by a surge of electronic goods ahead of the World Cup in June. But a 10-day nationwide truck strike, weakening consumer confidence, and a weak real has dampened retail confidence for the holiday season.

With business and consumer confidence ebbing post-World Cup, Thadani said the truck strike was a “killer blow to any recovery, especially for Manaus.” The setting of minimum truck rates, one of the accords that brought an end to the truck strike, has been pinching shippers that don’t have their own trucking fleet.

“We are expecting a very weak Christmas this year and are forecasting imports will grow just 1 percent in the fourth quarter,” said Matias Concha, head of trade and marketing for ECSA at Maersk.

The decline of the real to the US dollar in the third quarter paused Brazilian retail restocking, and a 15 percent plunge in electronic imports in August bodes poorly for holiday demand, since volumes tend to rise by double-digits during that period. The majority of electronic components are imported from Asia and assembled in the Manaus free trade zone, in the Amazonas jungle region, before being distributed to Rio de Janeiro, Belo Horizonte, and São Paulo.

Declining Brazilian import demand has pushed down inbound spot rates from Asia. The spot rate to move a TEU from Asia to ECSA fell to $692 in the second week of December, the first time it has slipped below $700 in more than 10 years, according to Shanghai Containerized Freight Index. Spot rates prices are down nearly 75 percent from a year ago.

Reflecting the resilience of Brazilian export demand, outbound spot rates to Asia have remained  in the range of $1,600 to $1,900 per TEU, five Santos and Sao Paulo-based forwarders told JOC.com. That’s a higher range than the $800 to $1,000 spread on TEU export spot rates a year ago.

An increase in imports will aid Brazilian exporters, since it will shore up the number of containers available amid sporadic shortages, Antonio Dominguez, the managing director for Maersk Line in ECSA trades. “We are monitoring the situation in Brazil very closely,” he said.

Beef exports jumped 15 percent year over year to 34,240 TEU in the third quarter, while poultry exports dropped 3 percent, to 75,992 TEU, in the same period. Refrigerated exports to Europe fell 15 percent, on lower Russian and EU declines and will keep falling as Russia sources more from Asia, according to the Maersk report. Brazilian reefer exports to Asia rose 11 percent in the third quarter.

“The country is at a turning point. Industrial, agricultural, and commodities producers are optimistic that 2019 will be a better year after a highly challenging 2018,” Dominguez said. “Manaus has ground to a halt for much of this year but next year will be better, and imports will be much better.”