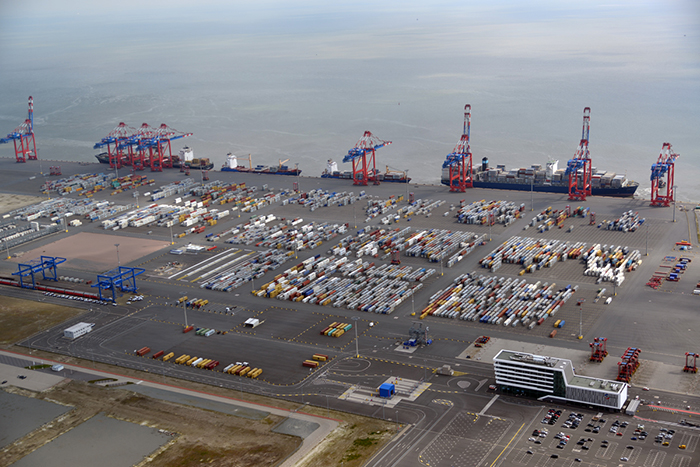 Six container carriers will begin calls at Wilhelmshaven from April, in a major boost for Germany’s sole deep-sea port, which is currently operating far below capacity.

The newcomers include the members of the new Ocean Alliance — Cosco China Shipping, Orient Overseas Container Line, CMA CGM, and Evergreen Line — as well as Hamburg Sud and Hyundai Merchant Maritime, which have recently struck slot charter deals with the 2M Alliance of Maersk Line and Mediterranean Shipping Co.

The announcement from Eurogate helps to fill critical gaps in market knowledge about port pairs and services of the new vessel-sharing agreements that begin April 1. Those gaps are complicating planning for shippers, ports, and others in the supply chain.

Initially, the Ocean Alliance will call at the port once a week with ships with capacities of 18,000 twenty-foot-equivalent units on its Asia-North Europe 1 service, said Eurogate, the majority owner of Wilhelmshaven’s Jade Weser terminal.

Hamburg Sud, which is being acquired by Maersk, and HMM, will also begin calls in April alongside the 2M, which has been calling at Wilhelmshaven since the Danish and Geneva-based carriers joined forces in early 2015.

“We are delighted that with Ocean Alliance we have attracted four additional shipping lines ... to Wilhelmshaven. This is a significant success that we have worked long and hard to achieve,” said Michael Blach, chairman of Bremen-based Eurogate’s management board.

“The fact that two of the three major shipping alliances will visit Germany’s only deep-water port from spring 2017 will give Wilhelmshaven a new growth spurt — also with respect to the portfolio of additional transport and logistics services.”

The rotation of the Ocean Alliance service is: Shanghai-Ningbo-Xiamen-Yantian-Singapore-Felixstowe-Rotterdam-Gdansk-Wilhelmshaven-Felixstowe-Singapore-Yantian-Shanghai.

The arrival of the Ocean Alliance is a significant boost to Wilhelmshaven, which has struggled to lure services from its neighboring rivals Hamburg and Bremerhaven since it opened in late 2012.

Volume increased 12.9 percent in 2016 to 481,720 TEUs, helped by the rising traffic on the 2M carriers’ twice weekly Asia-Europe services, but remains well below the terminal’s 2.7-million-TEU annual capacity.

However, the port will reach the limits of its capacity by 2027, justifying the construction of a second terminal, according to a feasibility study last year.

A second terminal “is not only technically realizable, but also economically prudent in the medium-term,” according to the Bremen-based Institute for Shipping Economics and Logistics.

Eurogate, and its minority-owned Italian operator, Contship Italia, handled 14.6 million TEUs in 2016 at 11 terminals from Northern Europe to the Mediterranean. The company expanded its network in January to the Cypriot port of Limassol.