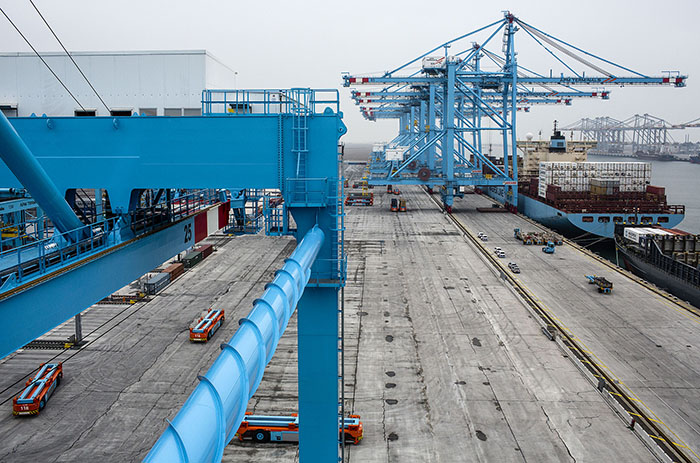 The deal was spurred by dockworker worry over the spread of automation, such as the fully automated Maasvlakte II terminal at the port of Rotterdam, pictured. Driverless container transporters can be seen at bottom left.

The Rotterdam port authority, terminal operators and trade unions have reached an agreement on job security for dockworkers in the container sector, lifting the threat of further strikes.

The unions will recommend the deal to their members who staged several all-out 24-hour strikes earlier in the year to protest threatened job losses due to the increasing automation of terminals in Europe’s largest container port.

The FNV Havens and CNV unions claimed up to 800 of the 3,700 jobs in the container sector would be lost by the end of 2017 as a result of automation, which is occurring at container terminals in ports around the globe. Automation is the most efficient means to handle mega-ships with capacities of up to 20,000 twenty-foot-equivalent units and Rotterdam's Maasvlakte II terminal is fully automated.

Under the agreement, reached after 18 months of negotiations, all dockworkers who had full-time contracts on Jan. 1, 2015, will be guaranteed jobs until July 1, 2020.

The deal also improves conditions for older workers over 60 who can work 60 percent of the full-time contract at 95 percent of the salary and a 100 percent payment into their pension schemes on the condition that they retire at 65.

The 120 members of RPS, an employment agency for container terminals that is facing bankruptcy, will also get job security.

The port authority and the terminal operators have agreed to share the estimated 20-million- to 30-million-euro ($22 million to $33 million) cost of the agreement.

The deal has been struck against a backdrop of a 0.5 percent decline in traffic in 2015 to 12.2 million twenty-foot-equivalent units and further falls in the first six months of this year.

“It is unprecedented that unions and companies have succeeded in coming to this agreement despite the market being under such pressure,” the port authority said.

Dockworkers will vote on the agreement in August.