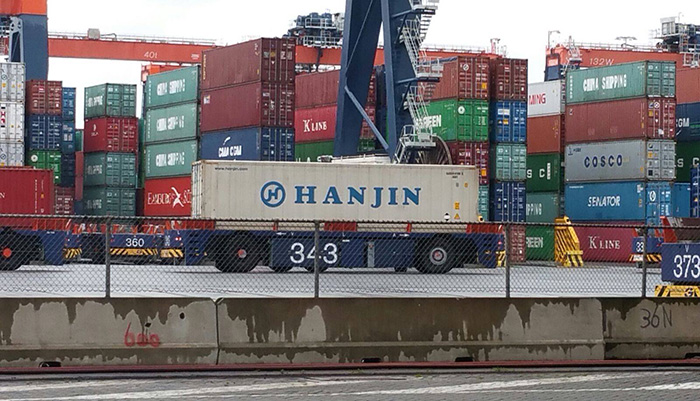 Getting stranded Hanjin Shipping containers out of ECT in Rotterdam, such as this one pictured on an automated vehicle at the terminal, just got a whole lot cheaper for shippers. Credit: Paul Henriquez

The agreement comes just days after a Rotterdam court ruled in favor of ECT’s customers, saying its fixed release charges of 1,000 euros ($1,130) for a standard dry container and 1,500 euros for refrigerated and tank containers was unlawful.

The court said the company, owned by Hong Kong-based Hutchison Port Holdings, could only charge standard handling fees plus a 25 euro administrative surcharge. Shippers in Hong Kong are contemplating legal action against HPH’s Hongkong International Terminals and have submitted the Dutch ruling to the Hong Kong government.

The ECT discharge tariffs have been reduced to 500 euros for fully laden dry van containers and 600 euros for “specials” including reefer and tank containers.

The deposit for a standard container has been cut to 1,000 euros from 2,500 euros but remains at 5,000 euros for reefers and tank containers. The new discharge tariffs and deposits are valid until Sept. 30.

ECT said the agreement does not cover payment “under protest” and in these cases invoicing will be based on individual situations.

Containers can only be collected and returned by trucks, ECT said.

“The parties have agreed to a procedure in which all stakeholders bear part of the extra burden,” the signatories to the agreement said in a joint statement.

“This essentially ensures that the cargo flow will remain moving. A time-consuming and costly process has been avoided for those parties waiting for their cargo.”

The focus has now switched to Hamburg, one of three continental ports — along with Los Angeles and Singapore — that Hanjin has ordered its ships to sail to avoid seizure by creditors. Several Hanjin ships have been arrested in Singapore, China, and Australia as the company works to lodge requests for bankruptcy protection in jurisdictions around the world. Those requests have been granted in the United States (on a temporary basis), the United Kingdom, and South Korea.

The Hanjin Harmony, set to arrive in Hamburg on Sept. 10 is now expected on Sept. 13, while the Hanjin Africa is said to be waiting orders from the carrier’s Seoul headquarters. Risk of arrest and other factors have pushed more than half of Hanjin's container fleet off course.

While Hamburg is seen as a “safe” port for Hanjin Shipping’s vessels, shippers and forwarders face heftier charges to get their containers released from Europe’s third-largest container hub than their counterparts in Rotterdam.

In the United Kingdom, the British International Freight Association has asked its members to help it decide if it should mount a legal challenge to the 460 pound ($612) release fee and 2,000 pound deposit payable to the port of Felixstowe. Shippers are also concerned about small print that includes a warranty, waiver, and indemnity in favor of the United Kingdom’s largest container port.

While shippers with containers on board Hanjin ships face extra costs and delays, the carrier’s collapse is not expected to have a major impact on Europe’s supply chain because it accounts for less than 5 percent of capacity on the Asia-Europe trade.