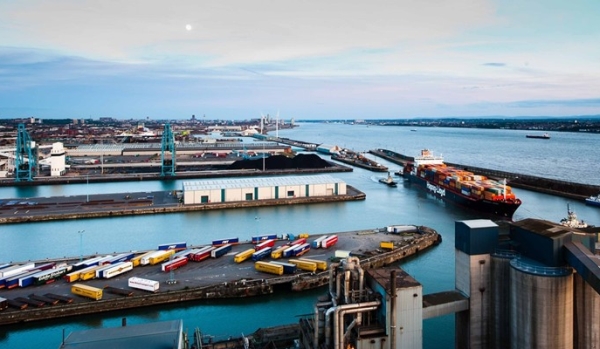 The port of Liverpool.

Peel Ports, owner of the port of Liverpool, signed a £100 million ($168 million) contract with China’s Zhenhua Heavy Industries to supply cranes for a new deep-water quay that will triple the size of container ships the northwestern UK port can handle.

Liverpool aims to tap a new shipping market it expects to develop when the enlarged Panama Canal, able to handle vessels up to 14,500 TEUs, opens in 2016.

Shanghai-based Zhenhua will supply five ship-to-shore megamax quay cranes and 12 cantilever rail-mounted gantry cranes for the first phase of the $500 million Liverpool2 project, which will expand capacity by creating a new river berth than can simultaneously handle two 13,500-TEU ships.

The new post-Panamax facility will boost the port’s annual capacity by 600,000 20-foot-equivalent units to 1.4 million TEUs.

The new terminal will be outside the locks that restrict the existing Royal Seaforth Container Terminal to handling vessels of no more than 4,000 TEUs capacity. The cranes are due to arrive from China in 2015.

With the expansion of the Panama Canal, container ships will be able to sail from Asia to the U.S. Gulf and East Coasts and then across North Atlantic, paving the way for the revival of round-the-world container services.

“The fact that we’ll be able to handle 90 percent of the global fleet will be a game-changer for shipping lines,” said Peel Port Group chief executive Mark Whitworth.

Although 60 percent of the UK’s container traffic is destined for the north of the country, around 80 percent currently moves via southern ports, led by Felixstowe and Southampton.

Liverpool has steadily lost traffic to its deep-water southern rivals over the years. The process accelerated with the growth of east-west services, particularly on the Asian trades, deploying ever larger vessels. It now accounts for around 8 percent of UK container traffic.

Zhenhua will supply a further three ship-to-shore cranes and 10 gantry cranes if the port proceeds with the second phase of the Liverpool2 project, which would increase capacity by an additional 900,000 TEUs.

Liverpool will retain its role as the UK’s leading trans-Atlantic port following the decision by Newark-based Atlantic Container Line to continuing calling at the port when its deploys five of the world’s largest container/roll-on, roll-off vessels in 2015.

The ships will have a container capacity of 3,800 TEUs, more than double that of the five 30-year-old vessels they are replacing, 45 percent more ro-ro space and 31 percent more space for cars, trucks and rolling machinery.