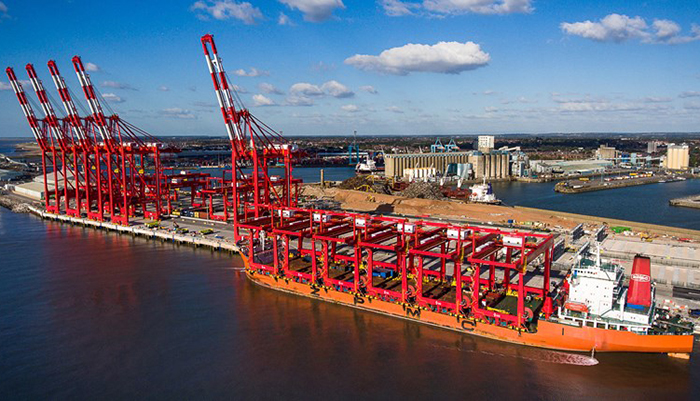 The Liverpool2 terminal, pictured, significantly strengthens the port of Liverpool's ability to compete with UK rivals.

The port of Liverpool on Friday officially inaugurated a new deep-sea container terminal as it works to create a new ocean trading gateway to attract traffic from the UK’s dominant south and east coast hubs and re-jig the national supply chain.

The Liverpool2 terminal, which cost 400 million pounds ($495 million) to construct, can simultaneously handle two vessels with capacities of up to 13,500 twenty-foot-equivalent units and has an annual capacity of 1 million TEUs.

The northwest UK port’s existing Royal Seaforth terminal also has an annual capacity of 1 million TEUs, but it can only handle one 4,500-TEU ship at a time.

Liverpool is the UK’s leading trans-Atlantic port, with a 45 percent market share, but the bulk of import and export containers, particularly on the Asia-Europe route, heading to the north of the country pass through Felixstowe and Southampton.

“Today marks the beginning of a new era for the port of Liverpool,” said Mark Whitworth, CEO of Peel Ports, the owner of the port.

“Liverpool is in the right location, providing state-of-the-art facilities and technology, and offers a real competitive advantage with a shorter supply chain and providing an all-water route right to the heart of the UK via the Manchester ship canal.”

Some 35 million people in the United Kingdom and Ireland live closer to Liverpool than the traditional container ports in the south of the country, the port said.

Liverpool’s long-term aim is to capture a 15 percent to 20 percent share of the UK container market, up from 8 percent currently. The port also plans to promote trade routes to the west coast of South America via the enlarged Panama Canal, which can handle ships up to 13,500 TEUs compared with a previous ceiling of 4,500 TEUs.

Peel Ports signed a memorandum of understanding with the Panama Canal Authority two weeks ago aimed at increasing traffic between Liverpool and the Central American waterway.

Peel Ports operates six ports in the United Kingdom and Ireland, including Clydeport, Scotland’s main container hub, and a container terminal in Dublin.

The group, in which Deutsche Bank’s infrastructure fund has a 49.9 percent stake, handles 65 million tonnes (71.7 million tons) of cargo a year, around 13 percent of total UK traffic.