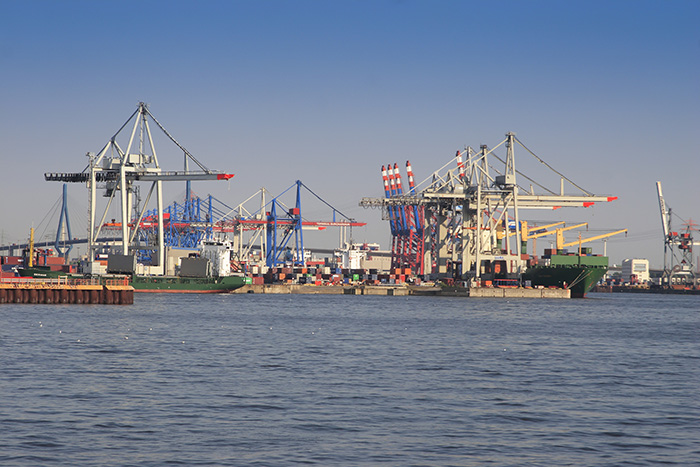 Hamburg's position up the Elbe River limits how heavily loaded ships can be when calling the port.

The port of Hamburg’s container traffic stalled in the first half of the year as the launch of new carrier alliances benefited one of its terminal operators at the expense of a rival stevedore.

Europe’s third-largest ocean container hub handled 4.5 million TEU in the first six months, further widening the gap with the top two ports, Rotterdam and Antwerp, which both increased traffic during the period.

“Here one company was able to profit considerably better than the other from the very extensive changes so far implemented on container liner services,” Axel Mattern, Joint CEO of Port of Hamburg Marketing, said in reference to the new alliance schedules introduced in April.

“These caused shifts in market shares in Hamburg. Alterations in shipping company alliances and schedules often make an impact on throughput volumes and container terminal utilization in the ports.”

Hamburger Hafen und Logistik AG, Hamburg’s leading terminal operator, earlier this week attributed an 11.8 percent rise in its first traffic at the port to 3.4 million TEU to “the reorganization of the alliances of the shipping companies.”

Hamburg’s second terminal operator Eurogate is due to publish its first-half results at the end of the month.

The stagnant traffic was also due to the delay in deepening the Elbe River, Hamburg’s outlet to the open sea, and current delays in import clearance, Mattern said.

The 0.3 percent increase in loaded containers to 3.8 million TEU in the first half “reflected a positive trend,” while the 3.2 percent slide in empty container traffic to 622,000 TEU was due to the failure of large vessels to sail fully loaded into the port.

“That shipping companies tend to route empty boxes for weight reasons via other ports is partly because with the adjustment of the Elbe fairway still not implemented, mega-container ships still cannot be optimally loaded if calling at Hamburg,” Mattern said.

“Once the channel is dredged, mega-ships will be able to bring [an] additional 1,600 and more containers to Hamburg and take that many again on departure.”

The positive feature of the stalled traffic is that the trade with Hamburg’s biggest market, China, which deploys the largest vessels, grew 1.3 percent to 1.3 million TEU.

Traffic with the second-largest destination, Russia, grew 4 percent to 225,000 TEU despite trade sanctions on the Kremlin for its annexation of Crimea.

The German port’s overall throughput was also unchanged from a year ago, dipping 0.2 percent to 70 million tonnes.