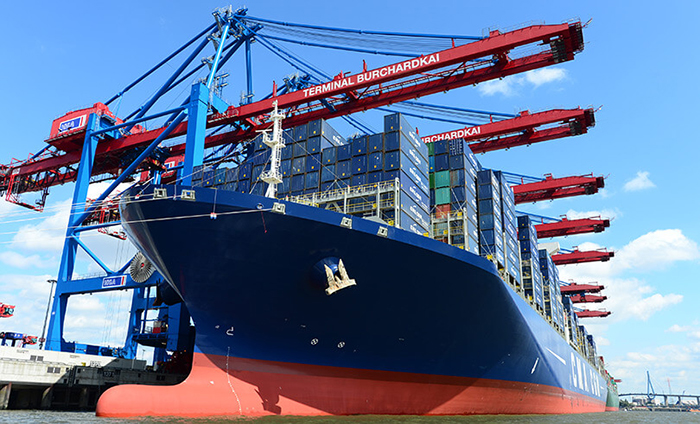 HHLA is optimistic after growth in 2016 and a favorable legal ruling.

Strong growth in the second half of 2016 supported a recovery in full-year container volumes and revenue for Hamburger Hafen and Logistik AG, which has been losing ground to competitors at north European ports in part because of the insufficient depth of the Elbe River.

The depth of the Elbe means the port of Hamburg, where HHLA is the largest terminal operator, can only handle the largest fully loaded vessels at high tide. This has led to volumes migrating to rivals Rotterdam, Antwerp, and Bremerhaven.

HHLA’s traffic in 2016 rose 1.5 percent year-over-year to 6.7 million twenty-foot-equivalent units, with 6.4 million TEUs passing through Hamburg, and the remainder through its Container Terminal Odessa in Ukraine.

Hamburg, which was previously the second-largest container port in Europe, has dropped to third place behind Antwerp and Rotterdam. Hamburg has warned for years that failure to deepen access to the open sea would result in a continuing decline in volumes.

The port last week received conditional approval to deepen the Elbe, which has raised the hopes of HHLA for its future. Although environmental groups are objecting to the dredging of the river, a court said work could proceed, provided a number of environmental measures were addressed.

HHLA booked revenue of 1.2 billion euros ($1.27 billion) last year, up from 1.1 billion euros the previous year, and delivered an operating profit of 163 million euros. Upon completion, the dredging should help HHLA stop the losses of tens of millions of dollars per year it says it incurs because of draft-related shipping delays.

The dredging work would stretch over 130 kilometers (81 miles) of the Elbe and enable ships with drafts of 14.5 meters (47.6 feet) to reach the port, where the upper limit of ship drafts is currently 13.5 meters.

HHLA’s intermodal business grew strongly last year, up 6.8 percent to 1.4 million TEUs, with much of the growth in rail, which expanded 8 percent, and truck volumes expanded 2.9 percent.