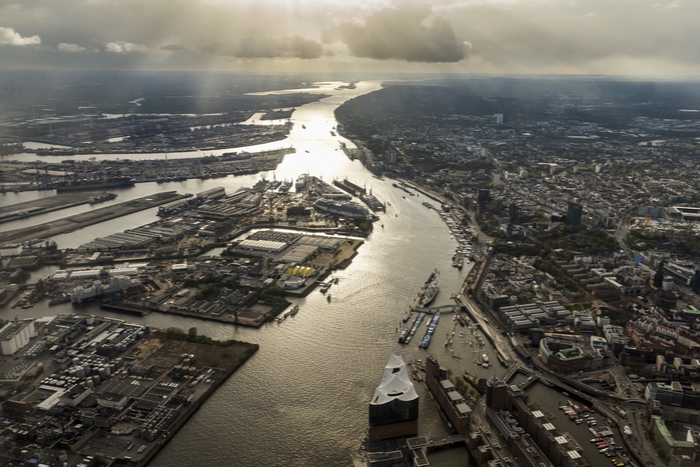 The Elbe River is the gateway to the port of Hamburg for ocean-going ships, and expansion work means larger vessels, and more of them, can call at the German hub. Photo credit: Shutterstock.com.

The Port of Hamburg has expanded its Elbe River access, widening the waterway at crucial points to enable greater numbers of ultra-large container ships to call at Europe’s third-busiest hub every year.

Work on a part of the river known as the “passing box” was completed Wednesday, the Port of Hamburg Marketing said in a statement, widening the section to 421 yards (385 meters), and a 22-mile stretch of fairway between Wedel and the mouth of the Stör River to 350 yards, more than enough to accommodate two passing mega-ships. Vessels of 23,000 TEU have a width of about 61 meters, while 18,000- to 20,000-TEU ships are approximately 59 meters wide.

“With the initial fairway widenings of the Elbe, we are on a good course, immediately improving the conditions for calls by mega-ships,” said Axel Mattern, joint CEO of Port of Hamburg Marketing, in a statement.

Port officials are hoping the improved access will continue a turnaround this year in a negative growth trend that has seen Hamburg lagging behind rivals Rotterdam and Antwerp in container throughput in the past few years. Volume in 2019 at the port has benefited from the January relocation of trans-Atlantic operations of THE Alliance — Hapag-Lloyd, Yang Ming, and Ocean Network Express (ONE) — from Bremerhaven, a move that Alphaliner estimated early last year could add about 500,000 TEU to Hamburg’s annual volume.

The full-year 2019 volume results for Hamburg are not yet available, but in the first nine months of 2019 the port handled 7 million TEU, an increase of almost 7 percent, according to port authority figures. Rotterdam’s January-September throughput grew 3.8 percent to 11.2 million, and Antwerp’s full-year volume was up 6.9 percent to 11.87 million TEU.

It was a different picture in 2018, however. Rotterdam grew its volume 5.6 percent to a record 14.5 million TEU, and Antwerp increased its throughput 6.2 percent to 11.1 million TEU, according to JOC.com’s Top 50 Global Container Port Rankings for 2018. Hamburg, on the other hand, reported a 1.1 percent decline in volume in 2018 with 8.7 million TEU, the lowest throughput at the port since 2010.

The primary driver of the decline was a decline in empty container moves, which is directly linked to the depth restrictions on the access river. The inability of mega-ships to call and leave Hamburg optimally loaded because of draft restrictions and limited tidal windows has forced carriers to prioritize the transport of full containers, with empties being routed via other hubs in northern Europe. Among Europe’s major ports, Hamburg’s container throughput features the lowest proportion of empty boxes, at about 14 percent, and the highest for loaded containers, at 86 percent.

But as much as it was a priority to deepen the Elbe, it has taken 13 years of political and legal wrangling to get the dredgers busy on a project that Jefferies has valued at $460 million to $570 million, and it will take at least until 2022 before it is completed.

Dredging operations on the Elbe began in July, and the deeper fairway will add one extra meter of draft, allowing container ships to carry about 1,800 more TEU per call, irrespective of the tide. Once the project is complete, loaded vessels will be able to leave Hamburg with a draft of 13.5 meters (44 feet) during low tide and 14.5 meters during high tide.

As one of Europe’s main hubs, Hamburg is vulnerable to network changes among the three main container carrier alliances, and last week had to release a statement reassuring customers that a switch of some Ocean Alliance services to Antwerp as part of its revised 2020 network schedule would not result in an annual loss of 150,000 TEU.

“In the shipping industry, such liner service adjustments are absolutely normal when the shipping alliances develop new products and present no cause for concern. Hamburg is not losing any cargo because of it,” Mattern said in a statement.