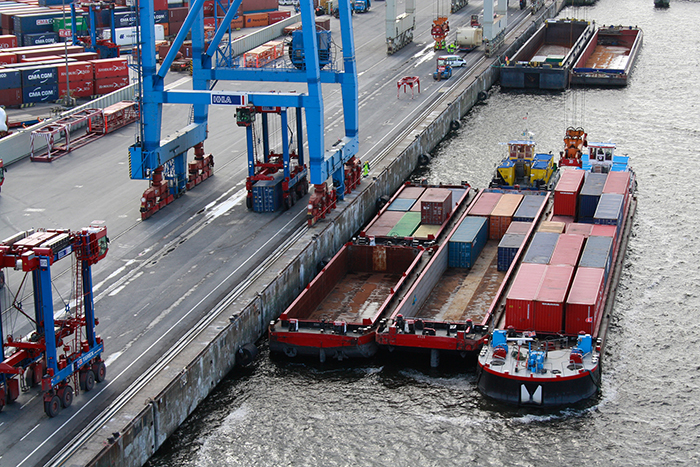 HHLA's barges have been busier than usual in 2017.

Hamburg shippers are increasingly using barges to transfer containers between Hamburger Hafen und Logistik AG (HHLA) terminals in the port of Hamburg, as that volume rose 4 percentage points year over year in the first half.

This “cost-effective” means to transferring containers is used primarily for heavy shipments, such as intermediate aluminum products or potatoes, and in the month of May 7.2 percent of the 14,469 containers moved between terminals went by barge, which is a record high for HHLA.

HHLA subsidiary Container-Transport-Dienst (CTD) carriers out the transfers, which are focused on heavy loads in order to reduce stress on the road infrastructure in and around the port of Hamburg, according to CTD Managing Director Ralph Frankenstein.

CTD uses inland water vessels that do not have their own propulsion and are loaded at quay side until they are picked up by a pushed barge.

Moving empty containers from Container Terminal Altenwerder to the O’Swaldkai multi-purpose terminal, where they are loaded with cars and then taken back to Altenwerder, is one example of the transfers CTD carriers out, HHLA said.

HHLA was a winner from the reshuffling of the global vessel-sharing agreements that took place in April and had an uneven impact on the port of Hamburg as a whole.

Although HHLA’s first-half traffic jumped 11.8 percent to 3.4 million TEU, traffic through the entire port was flat at 4.5 million TEU.

The stagnant traffic was also due to the delay in deepening the Elbe River, Hamburg’s outlet to the open sea and current delays in import clearance, the port said when announcing its first-half results.