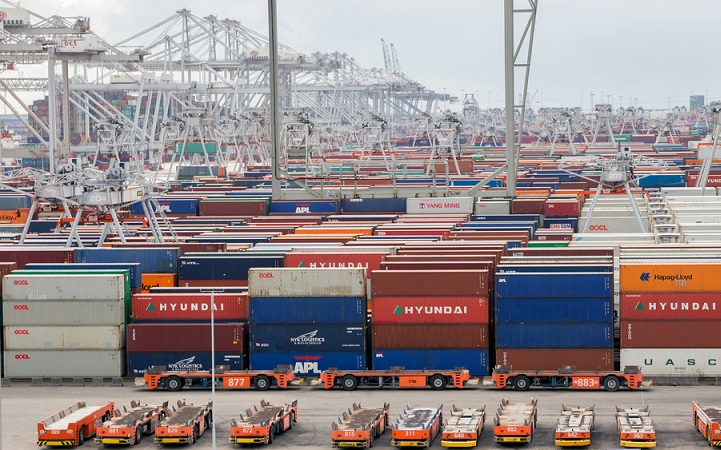 Rising volume from other trades is helping to push up the overall Rotterdam and Antwerp throughput figures. (Above: Rotterdam port.) Photo credit: Shutterstock.com.

Declining container volume on the Asia-Europe trade is having little effect on the gateway hubs of Rotterdam and Antwerp, which have both recorded strong growth in throughput in the nine months through September.

Rotterdam even reported record volume during August as Europe’s busiest port handled 10.78 million TEU in the first nine months of the year, up almost 6 percent on the same period in 2017. Europe’s number two port of Antwerp saw its throughput rise 7 percent to 8.33 million TEU.

The volume increases at both ports come despite a steady decline in container imports from Asia that can be seen in the latest data from Container Trades Statistics (CTS). In the January-August period — the September figures are not yet available — volume growth on the Asia-Europe trade actually fell for five of the eight months.

A late Chinese New Year in February saved the first-quarter volume, but numbers of containers being imported into Europe from Asia started to decline from May, which recorded a 4 percent decline year over year. June was down 1.6 percent, and the peak season months saw July volume falling 3.7 percent, and August by 2.4 percent compared with the same period in 2017.

Yet even with the overall slowdown in volume, Rotterdam reported a 10 percent growth in its Asia-Europe segment volume in the first nine months of the year. The alliances are concentrating their calls on the major hubs so even with an overall market slowdown, Rotterdam’s gateway position and first port of call status on the Asia-Europe trade allows it to maintain growth in volume growth.

Antwerp, by contrast, recorded no growth in imports from China and just a 2.2 percent increase in its imports from Asia.

On the backhaul trade, European exports to Asia were down significantly in the January-September period as China’s ban on importing wastepaper and scrap continued to influence the eastbound market. Rotterdam’s outbound volume fell 7.6 percent, while Antwerp’s exports to China dropped 6.7 percent.

Jacques Vandermeiren, CEO of the Antwerp Port Authority, said 2018 was already a peak year for the port and he expected to hit a record figure by December.

Rising volume from other trades is helping to push up the overall throughput figures. North American trade lane volume at Rotterdam has increased by almost 10 percent, and handling for the South American lane rose by over 20 percent in the first nine months.

In Antwerp, throughput for the largest shipping area, Europe, registered 12.4 percent growth in the first three quarters year over year, while throughput for North America grew by 8.2 percent.

But the rising volume entering Europe through Rotterdam and Antwerp is straining the intermodal infrastructure. Much of the cargo is carried on mega-ships that can have call sizes of up to 10,000 TEU with several in the ports at one time, leading to often lengthy delays and barge congestion at peak times of the week.

This is not being helped by low water levels in the Rhine River that are seeing containers stacking up at inland terminals and pushing the bottlenecks back up the pipeline.

An inland terminal operator told JOC.com that the low water was having a huge impact on the ability to ship containers into Central Europe along the waterways.

“The loading capacity had dropped to one-third of our normal capacity in tonnage,” he said. “A further consequence of the water levels is that the normal ‘free available’ trucking capacity is now fully utilized, leaving shipping lines, forwarders, and terminals fighting over every last truck and paying higher than normal rates for these trucks.”

The terminal operator said rail was an alternative for shippers, but it was difficult to increase the rail capacity within a short period of time as equipment and drivers were not readily available. That meant the existing capacity on the rail was fully utilized and extra capacity was only marginally available.

“It is my personal belief that this will very likely force shippers to reconsider their modal split between barge-rail-truck and that the rail might get an extra boost as a result in the coming year,” he said.

The port of Antwerp is also expecting a modal shift but expects this to be more of a long-term development with the modal split adjusting by 2030 as fewer goods are transported by road and more by rail and barge.

Global Shipping Outlook: A Sneak Peek at 2021
Port Performance North America: Managing Cargo Flow During a Pandemic — and Beyond
END_OF_DOCUMENT_TOKEN_TO_BE_REPLACED