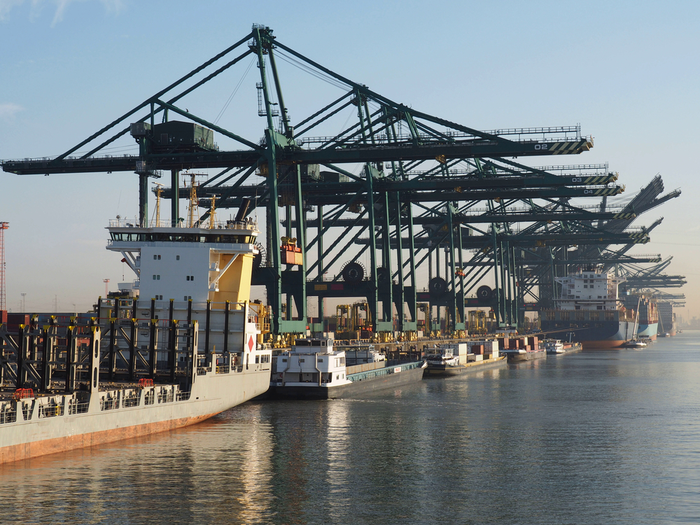 The enormous ripple effect mega-ship calls are placing on European gateway ports and their hinterland logistics has once again been highlighted, this time by industry academic Theo Notteboom.

The professor in port and maritime economics and management, and director of the Center for Eurasian Maritime and Inland Logistics, outlined the sheer scale of a mega-ship call at a recent European Sea Ports Organisation (ESPO) meeting in Livorno, Italy.

Barge, truck, and rail operators are inundated weekly by the container exchange of giant vessels deployed by alliances that concentrate Asia-North Europe services in a few hubs.

The Journal of Commerce heard last year from Rotterdam that an 18,000-TEU vessel calling at the Dutch port can exchange 10,000 TEU, and to transport the cargo onward, the ship requires an average of 10 feeder vessels, 19 trains, 1,560 trucks, and 32 barges.

It is easy to see how having several mega-ships in port at the same time is a logistical nightmare that can quickly choke a port. Shippers using the ports of Rotterdam and Antwerp regularly face barge shipping delays, with intermodal operator Contargo reporting, on June 25, handling delays for barges standing at 28 hours in Antwerp, and 24 hours in Rotterdam.

Despite questions of the viability of mega-ships in an era of declining demand growth, the big ship capacity spigot remains wide open. Mediterranean Shipping Co. is scheduled to take delivery of 11 ships of 22,000 to 23,000 TEU from August, while CMA CGM has nine 22,500 TEU vessels that will be delivered from December, and HHM’s 12 ships of 23,000 TEU will start arriving in 2020.

Carriers are blanking capacity on the Asia-Europe trade to better balance it with demand levels, but even with a weakening European economy, the hub ports continue to grow their throughput, and much of that is arriving on mega-ships. After a record first quarter, Rotterdam in April handled its second-highest monthly volume at 1.3 million TEU. This follows a record 14.5 million TEU throughput in 2018.

In the first quarter, Antwerp handled 2.76 million TEU, up slightly year over year and following 11.1 million TEU that crossed the port’s busy wharves in 2018, a 6.2 percent increase on the previous year.

But as the barge congestion shows, rising volume does have its price, and improving inland connections and cutting down handling delays has been at the top of the agenda for both Rotterdam and Antwerp, which depend heavily on barge transport.

Rotterdam over the past three months has added three inland terminals to its North West Central Corridor, transporting 6,500 TEU a week via that trade route. The connections build on Rotterdam’s strategy of limiting delays at the deepsea and inland terminals by bundling of cargo on higher capacity barges, fixing port call agreements with larger freight volumes of 150 to 200 TEU per call, and fixing point-to-point connections between inland terminals and deepsea terminals.

Antwerp’s efforts to improve handling efficiency include promoting greater use of rail and barge, rather than truck, and “working at night wherever possible,” the port authority said, announcing in May that terminals PSA Europa and Noordzee would be open 24 hours a day on weekdays.

The extended gate times are designed to meet rising cargo demand while also improving traffic flow in and around the port. In addition to extending hours at PSA Europa and PSA Noordzee, the Medrepair empty container terminal in the port will also open an hour earlier.

"Now the terminals and depots in the port are offering a way to avoid congestion during the day. However, this will only work if everybody joins in, including the warehouses and production sites in the hinterland,” said Stephan Vanfraechem, director of trade group Alfaport-Voka.

While barge transport dominates the intermodal connections at Rotterdam and Antwerp, at the German hub of Hamburg the focus is on rail that handles in excess of 40 percent of the port’s container traffic. During the first quarter, containers transported by rail increased almost 14 percent year over year as THE Alliance (Hapag-Lloyd, Yang Ming, and the Ocean Express Network) shifted trans-Atlantic services from Bremerhaven late in 2018.

About 12 percent of all rail freight services in Germany have their origin or destination in the port of Hamburg, with more than 200 freight trains daily using the Hamburg Port Railway network.

“Against the backdrop of overloaded roads and the desire for the most environmentally friendly freight transport possible, in the coming years, rail will gain in importance in seaport-hinterland transport,” said Axel Mattern, joint CEO of Port of Hamburg Marketing.

But as with Rotterdam and Antwerp, the growing volume is stressing Hamburg’s intermodal system, and further infrastructure development is urgently needed.

“Both the rail network and the inland handling terminals have to have both their performance and capacity upgraded for the additional freight volumes,” Mattern warned.

Permalink Submitted by niels.vandongen... on Jul 2, 2019 4:19AM EDT
Unfortunately, it was announced end of June that both PSA terminals in Antwerp have already ceased their openings at night, apparently because of discussion on a charge of EUR 2.34 per container to be paid by the hauliers. A missed opportunity for all!
Port News›European Ports›Port of Antwerp
Europe