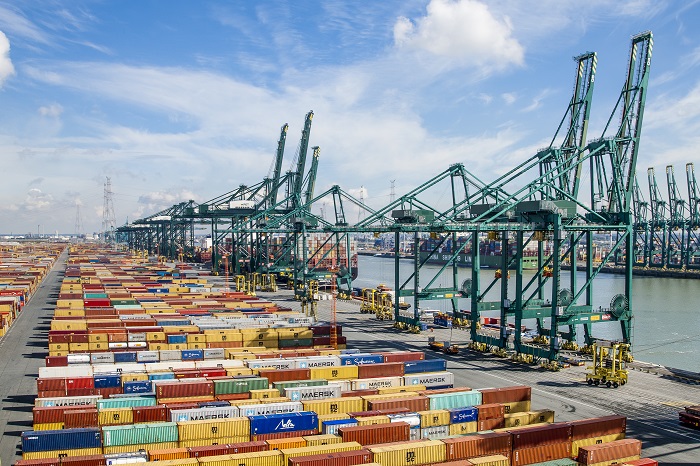 The stronger European economy with its rising container volumes and net-generation technology has exposed a weakness in the continent’s supply chain — and it’s one that will likely require the input of all stakeholders to eliminate. (Above: The Port of Antwerp.) Photo credit: Shutterstock.com.


Automated container terminals can help European hubs handle mega-ships and the exchanges of up to 10,000 TEU that accompany each port call, but those efficiencies are often lost as inland-bound cargo moves from the quay to the intermodal connections.

Hub ports such as Rotterdam, Antwerp, Le Havre, and Hamburg have had little choice but to invest in upgrading infrastructure and deploying the largest available cranes to handle the giant vessels that can exchange 10,000 TEU in one port call. Developments in technology have allowed terminals in these ports to automate many functions that create faster and more efficient handling solutions.

But as technologically advanced as a terminal may be in the loading and off-loading process, having such large exchanges of containers from the mega-ships still creates significant bottlenecks that ports such as Rotterdam and Antwerp are finding difficult to solve. The problem is as much moving containers out of the port as it is unloading or loading a vessel.

In a bid to address the persistent problem of shifting containers from the deepsea terminals inland, the ports of Rotterdam and Antwerp held scores of meetings and workshops with all parties in the supply chain and recently announced measures to address mounting delays. These include better scheduling of barge calls at the deepsea terminals with the aim of reducing the dozens of small feeders and barges that choke the terminals when mega-ships call, although the initiatives will take time to roll out.

Shippers contacted by JOC.com said automated terminals did not factor into their supply chain planning. The transport and logistics manager for a large European wholesaler said an automated terminal did not determine his port choice when shipping more than 30,000 TEU a year from Asia into Europe.

“Yes, it may positively assist in improving the deliveries, but moving containers between terminals is the biggest issue we have in places like Hamburg and Rotterdam since the new alliances began in April last year, and getting the boxes on barges and inland out of Antwerp and Rotterdam,” one shipper told JOC.com. “Terminals do not have the capacity to serve barges or trains, especially in Rotterdam as they continuously focus on the sea side instead on the land side. This causes the biggest delays and congestion. In two decades nothing has changed for the better, it only gets worse.”

Rogier Spoel, European Shippers’ Council air transport policy manager, said accommodating the rising flow of containers through the deepsea terminals was not a specific terminal or port problem, but a supply chain problem, and one in which there was not enough coordination around the seamless transport of the containers.

He said terminals were being squeezed between the demands of carriers and their mega-ships and shippers wanting their containers without delays.

“Ships are getting bigger, and with less calls the drop off is bigger and the stacks increase, causing issues with hinterland transport,” Spoel said. “Slowing the unloading of ocean vessels will keep the quay taking longer, which could also hurt barge and short-sea operation.”

More automation — inevitable, but not without growing pains

One shipper told JOC.com that he was not even convinced that automating terminals was a positive step forward. “As a business we do not yet have a view on these terminals, but having worked with automation in the supply chain for some time, I have a healthy degree of skepticism,” the supply chain director for a mainstream retailer in Europe said. “Automation is great until there is a problem, and when that happens, there is rarely ever a capable contingency plan.”

There is no stopping the march towards automation, however. Terminals say automation will become critical in handling mega-ships and the more digitally connected supply chains of the future. One of those automated facilities belongs to Maersk Group’s APM Terminals at Rotterdam’s Maasvlakte II. A spokesperson for APM Terminals said liner market conditions were changing and a port operator had to keep up.

“Shipping lines are deploying larger vessels and the alliances are creating larger port call volumes so you have a challenging situation as a port operator to handle larger cargo volumes in a terminal that has space constraints,” the spokesperson said. “One of the appeals of automation is it allows a port operator to better handle terminal space constraints by creating a higher density container yard for customers.”

It is not really a choice. The APM Terminals spokesperson said having automated terminals would be a competitive differentiator in the future for port selection. “Landside customers who digitalized their supply chain can compete in business at an entirely faster pace than others. They tap into better data, use better analytics and artificial intelligence to give them the planning tools and informed choices to respond faster to shifts in consumer buying patterns, and offset supply chain disruptions,” he said.

“As a key player in supply chains, we have to compete in this space too, so we have to ensure both digital and physical connectivity. Automated terminals with their inherent high data [and] digital operations offer customers strong connectivity and data sharing options. The enhanced digital connectivity between liner companies’ vessels, terminals, and inland transportation [rail/road], based on the possibility to share digital data, will improve the planning and efficiency for all parties, which will in turn also improve the service to customers.”

While shippers say they aren’t yet seeing the benefits of automated terminals, port workers’ unions are viewing automation with rising frustration. Livia Spera, political secretary of the European Transport Workers’ Federation (ETF), which represents more than 5 million workers in 41 European countries, said if the move towards automation was a result of mega-ships being deployed, then container shipping lines had to bear some responsibility for the jobs lost as a result.

“We need to have all the concerned actors around the table to discuss and to take their share of responsibility for what is happening,” she told JOC.com. “If the customers of the port are pushing for more automation, if they are using mega-ships so they can benefit from bigger economies of scale, they are getting some benefit from it but all the rest of the actors are not getting any benefits. So those pushing automation should pay the price.”

Spera also pointed out that mega-ships had a cost for society at large because all ports wanted to be mega-ship ready. “So there are public investments in dredging, building new roads, and other infrastructure, and so on. There's a lot of public support that they receive, such as various favorable tax breaks. So we need to find a balance because you can't have it all. They are already treated in a special way so they need to take the responsibility.”

In addition to the labor issues, terminal automation also has a political side. Violeta Bulc, head of the transport commission of the European Commission (EC), told JOC.com that the EC had launched a research project looking at the impact of automation on jobs and was using maritime as a testing polygon for the transport sector.

“Technology has been evolving for the last 200 years and there are always people that are challenged, but we are adjusting. This is a political issue and we are aware of it,” she told JOC.com

“We know the jobs will be moving and we will see more and more digital solutions. But at the same time, we see there will be need for human expertise and knowledge in the future as well, so not all jobs will disappear.”

Spera said the ETF was running an automation roadshow to train members on automation at ports and what that will mean to port workers. The ETF is also cooperating with universities, think tanks, and research organizations to search for solutions that can help shape the future.

Asked if shippers can expect industrial action at ports in Europe, Spera said, “There is nothing planned, but we need to be clear on one thing — strikes never come out of the blue. It is a tool that a union has but you never strike until there has been some very hard negotiation.”

How to Improve OTIF: 15 Tips for On Time and In Full Delivery
END_OF_DOCUMENT_TOKEN_TO_BE_REPLACED