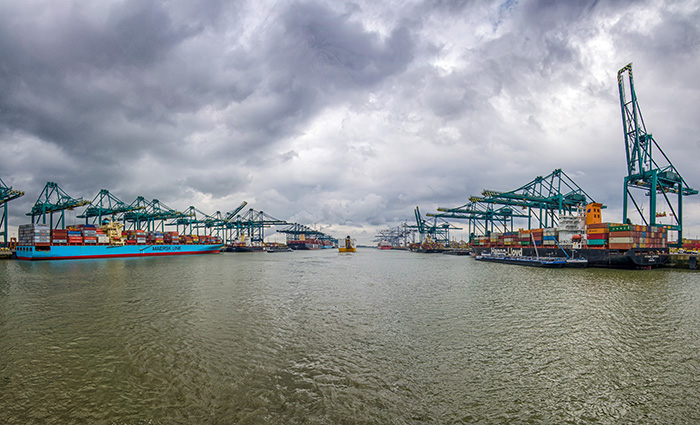 Work will come to a standstill at the port of Antwerp on Feb. 13 due to a labor strike. Photo credit: Shutterstock.com.

A port spokesperson said the 24-hour strike by private and public unions in Belgium — which includes port workers — against low wage increases would have a serious impact on the port, the country’s largest economic engine.

“A strike action in the port has a huge impact on the port activities, but also on the supply chain of the logistics and industrial activities in the hinterland. The financial impact of a national action day on the port will run into millions of euros,” the spokesperson said.

The strike will begin at 10 p.m. Feb. 12 and run until 10 p.m. Feb. 13, hitting all transport sectors hard, including the pharmaceutical export hub of Brussels Airport.

Belgium is the second-largest exporter of pharmaceuticals in the European Union, with 12.3 percent of all pharma exports being shipped through Brussels Airport. The airport’s overall air cargo grew by 7.5 percent year over year in 2018.

Shipping companies and logistics providers have been issuing customer advisories in response to the news. Atlantic Container Line (ACL) said it was informed of the strike by CEPA (Centrale der Werkgevers aan de Haven van Antwerpen), the company that represents employers in the port of Antwerp and negotiates employment conditions.

“To our regret, we were informed by CEPA that harbor wide actions are to be expected and that all terminals and depots are likely to be affected,” ACL told customers.

Inchcape Shipping Services said in an advisory that activities in the port of Antwerp will come to a standstill.

“At this moment it seems that locks will not be operated. It is also expected that terminals will close,” Inchcape noted. “Flemish pilots are unlikely to take part in the actions, but vessel traffic on the Scheldt and in the port of Antwerp will be virtually paralysed during the duration of the actions. The chance of a negotiated solution is extremely small.”

Antwerp-based forwarder AML said in a Twitter message to followers, “The labour unions of the Antwerp dockers have decided to join the national strike planned on Feb 13. Please adapt your operations.”

Brussels Airlines said with the major disruption expected, it has canceled more than 122 of its 222 scheduled flights on Wednesday, Feb. 13.

We are Crown Salvage Limited,