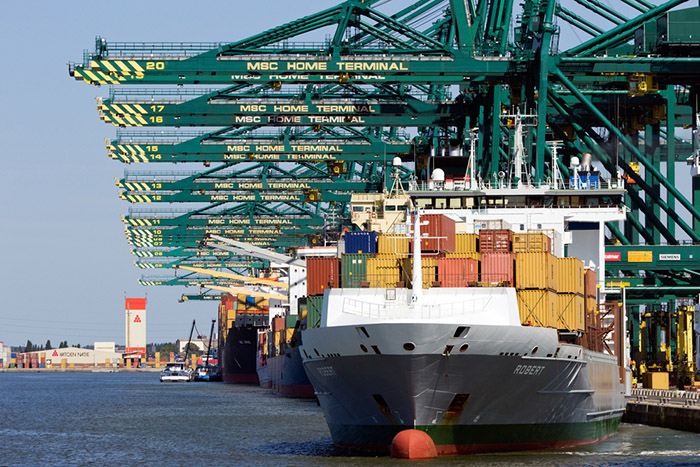 Antwerp bucked the trend of North Europe port's losing east-west services over the past 12 months.

The Ocean Alliance and THE Alliance, which are scheduled to start operations in April, are likely to have only a limited effect on productivity and the number of services available to shippers at North Europe ports, according to a look at the alliances’ published schedules by the London-based consultancy.

“The aggregate number of loops in the Asia-North Europe and North Atlantic trades will see no major change to the number of loops calling,” according to Drewry’s new quarterly Ports and Terminals Insight.

“This is in marked contrast to the changes seen during 2016 though,” Drewry said. Over the past 12 months, the number of east-west loops declined by 10 percent, with the deleted services all operated by the alliances.

Two out of nine weekly loops were removed from the North Atlantic trade — one each by the 2M Alliance and G6 Alliance — and three of the 18 Asia-North Europe loops were dropped — one resulting from the collapse of Hanjin Shipping.

However, average vessel sizes on the routes have only increased by a modest 4.3 percent, indicating that the alliances have used the reduced number of loops as part of a bid to cut overcapacity to bring it more in line with demand. “This is easier to do with a multi-loop operation than it is for lines outside the alliances.”

A slower rate of growth in ship sizes lessens pressure on ports that have struggled to maintain service levels as ships grow in size, taxing infrastructure and operations.

“The ports will not have to cope with fewer port calls and larger box exchanges, but rather the status quo will prevail,” Drewry said.

There have been significant changes in the number of weekly loops calling at individual ports, particularly in France, Belgium, and the Netherlands.

Drewry says it is “significant” how little change there is across the alliances — excluding 2M as its services are unchanged unless the addition of Hyundai Merchant Marine has any impact.

The total number of weekly loops remains unchanged at 11 on the Asia-North Europe trade and seven on the North Atlantic route, and several ports have seen no change in the number of weekly calls.

When the number of alliances reduces to three, some rationalization of port calls might be expected as most carriers will have access to an increased number of loops. This has not happened yet, however, with the 71 current loop port calls trimmed only to 70 for the new alliances

“The seemingly relentless move towards lower frequency services and larger ships may at last be on the wane — at least for east-west trades at North European ports.”

“The trend is still evident — particularly in terms of reduced service frequency in 2016 — and ports are not out of the woods yet, but the early indication from the new alliances when formed in 2017 is that things will not worsen markedly,” Drewry said.