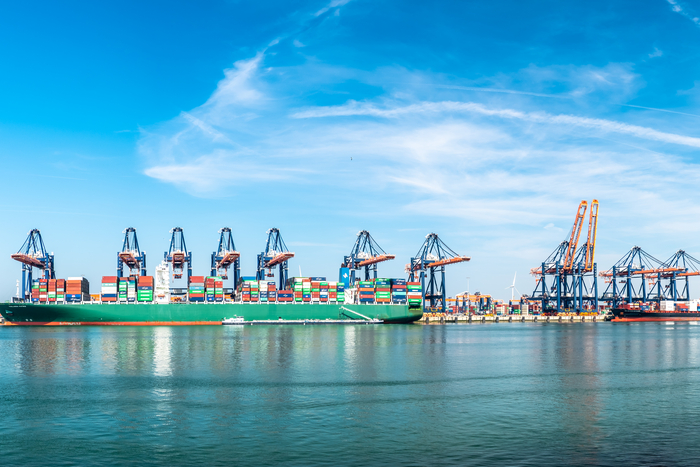 Although more ports are experiencing a decline in container ship calls, the extent to which blanked sailings is affecting ports has eased in the last week. Photo credit: Shutterstock.com.

Ports in Europe were approximately 50 percent more likely to see a decline in container vessel calls in early May than the global average, according to a weekly survey released Friday.

Sixty-eight percent of ports in Europe reported a decrease in container vessel calls in the past week, compared with 45 percent of ports overall, the Port Economic Impact Barometer report from the World Ports Sustainability Program (WPSP) and the International Association of Ports and Harbors (IAPH) showed.

The situation has worsened in Europe since the first week of the survey four weeks ago, when only 40 percent of ports there reported a drop in container vessel calls as non-essential commerce shut down amid the COVID-19 pandemic.

“The general loss of cargo for containers is probably less evident than expected, as April has closed with negative year-on-year figures that are much better than initially forecasted,” Pallis said in the report. “The decrease in the number of container vessels is not always directly related to the COVID-19 crisis.”

Blank sailings have taken root in the Asia-Europe trade, with ports reporting that total calls are down some 20 percent compared with a normal fully operational week. “Regional feeders in substitution of calls by mega-vessels are working well, but shippers do not always welcome the longer transit times associated with transshipment,” Pallis said.

Sea-Intelligence Maritime Consulting projected in late April at least 35 percent of the available capacity on Asia-Europe would be blanked through the first three weeks of May.

Nearly all of the 76 ports taking part in the survey reported a 5 percent to 25 percent decrease in calls, but the number of ports facing a drop of 25 percent or more in calls fell from about 11 percent the last two weeks to less than 2 percent this week.

“In the coming weeks, several of the larger ports anticipate significant downturns in volumes due to blank sailings in the container segment,” Notteboom said in a statement accompanying the report. “We expect [larger European hubs] to be impacted the most. Nonetheless, how much impact this will have on the global supply chain and how quickly economies will restart, especially in Europe, will require close monitoring.”

The report also touched on the impact of decreased cargo levels on warehousing activities near ports, although the authors noted that port authorities can’t always monitor and provide detailed information on warehouse and distribution activities, because they are usually under the management of a range of private companies.

“The overall situation has been very much dependent on the type of cargo served by each port,” the report said. “Food and medicines-related businesses have been doing well, and it seems that in some ports serving such cargoes some warehouses have even turned full.”

But ports in close proximity to one another are facing an issue of competition affecting utilization of warehousing capacity, according to the report.