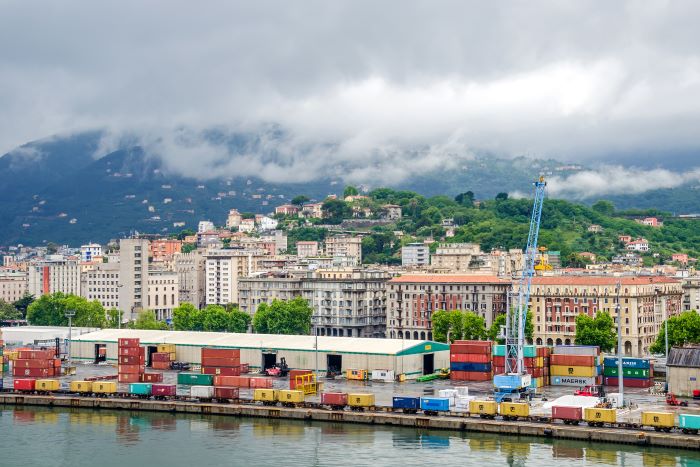 Responding to congestion issues and delays in barge and rail services at Northern European ports, Contship Italia is expanding its integrated transportation services from the Port of La Spezia, offering a southern alternative for cargo interests in northern Italy and Southern Europe.

Daniele Testi, the company’s marketing and corporate communication director, told an audience of beneficial cargo owners (BCOs), freight forwarders, customs brokers, and port representatives Thursday in Long Beach that importers and exporters in Central Europe who for decades have relied on barge and rail services from ports in Germany and the Netherlands as their primary gateways now seek to manage their risks by shifting a portion of their freight to La Spezia.

“They are directing some of their cargo from the Northern European ports south via rail,” Testi said. With its marine terminal concession, inland hubs, and intermodal rail assets, Contship offers cargo interests a one-stop integrated service, Testi said. Contship seeks to reduce transportation costs and minimize risks that freight forwarders and non-vessel operating common carriers (NVOs) can pass on their BCO customers, he said.

The effects of climate change are well under way in Northern Europe as delays on the Rhine River due to falling water levels are causing barge delays at the ports of Rotterdam and Antwerp, Testi said. Rail services at the Northern European ports are also challenged by growing container volumes, he said.

Additionally, terminal handling charges in La Spezia are about 22 percent lower than at Northern European ports, and efficient intermodal rail services to the interior combine to reduce transportation costs through La Spezia by about 10 to 15 percent, Testi said.

Unlike intermodal services from the US West Coast, featuring double-stack trains traveling a minimum of 2,000 miles, rail services linking La Spezia with Switzerland and northern Italy are single-stack trains on routes up to about 500 miles, he said. However, construction of a tunnel linking La Spezia with the interior and expansion of intermodal rail facilities at the port will soon allow Contship to increase the length of trains by about 50 percent, he said.

The Port of La Spezia is also growing, with plans to expand marine terminal and rail infrastructure, said Peter Hill, head of sales and business development at Contship. La Spezia regularly handles vessels of 14,000-TEU capacity and will soon receive vessels of 16,000-TEU capacity. Orders for ship-to-shore cranes that extend over 25 rows of containers, and a harbor deepening project, will allow the port to handle vessels of 20,000-TEU capacity, Hill said.

In the trades with North America, Contship ships via the three major vessel-sharing alliances, offering services to the East, West, and Gulf coasts, he said.