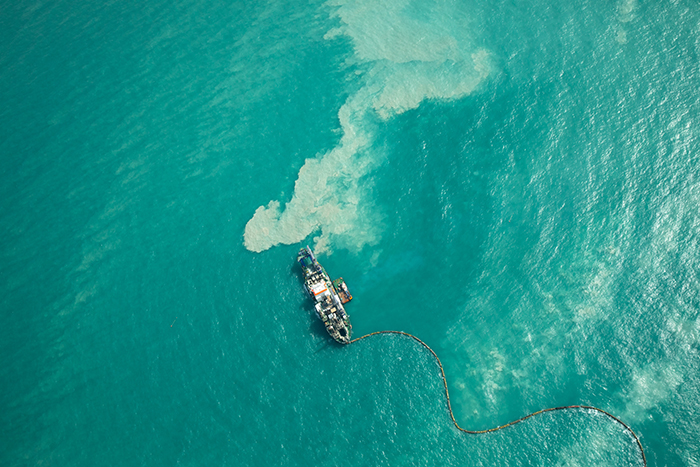 Dredging has generated controversy in the communities around the port of Santos as some contend it has increased flood risks. Photo credit: Shutterstock.com.

The port of Santos can now handle 10 percent more cargo thanks to a deal between local pilots and the port authority that has deepened the harbor’s draft to allow more heavily loaded container ships to call, moving the port a step closer to handling up to 13,000-TEU vessels.

Following an agreement with a local pilot organization, Codesp, the port authority for Santos, South America’s largest port for containers, has declared that the official draft of the navigation channel has been increased by 30 centimeters, to 13.5 meters (44.3 feet), at low tide. The port needs a draft of 14 meters during low tide to handle neo-Panamax ships expected to be deployed onto trade lanes connecting to the east coast of South America.

The deeper draft will allow the port to create hundreds of new jobs and secure an additional 1.6 billion reais ($416.4 million) annually in funding, according to Codesp.

The largest ship calling Santos is the 11,000-TEU Cape Sounio, which is operated by Zim Integrated Shipping Services and began calling at DP World Santos in June of last year, when it was called Embraport.

Mark Juzwiak, the head of institutional affairs for Aliança Navegação e Logística Ltda. and Hamburg Süd, said that the new draft has followed on from lobbying from the Santos Commercial Association (Associaçao Commercial do Santos: ACS) — of which he is a member of the shipping and logistics committee — and other pressure groups and is “tremendous news for shippers and shipowners”.

“The ACS has been talking to Codesp and the pilots for some time now and it finally seems to have paid off,” Juzwiak told JOC.com. “I think this might be a change of heart all around in terms of dredging policy and official draft in Santos.”

The draft of the harbor was reduced by a meter four months after some bumps were found in the entrance channel, he said. With those bumps removed, Juzwiak hopes to see more flexibility on draft limits so it can handle 365-meter long, 13,000-TEU ships.

“We have been pushing for this draft and there is even a chance it will go another 30 centimeters deeper in the future, but the overall dredging process is still something of a mess.”

The Hamburg Süd/Alianca executive said that the government initiatives to move dredging contracting into the private sector — and away from government-controlled dock companies such as Codesp — has been put on the backburner for now owing to a “lack of resources” and the forthcoming presidential elections in Brazil, scheduled for October.

Every extra centimeter allows for an extra eight containers (FEU), so the additional 30 centimeters will allow for 480 TEU on average. Carriers will need that extra capacity, as Santos’ container volume through May rose 11.1 percent year over year to 1.7 million TEU, according to port statistics. Exports led the growth, rising 11.5 percent to 842,086 TEU, while imports rose 10.6 percent to 843,872 TEU.

In the official letter sent to Codesp by the Port Captain’s Department for the Ports of São Paulo (CPSP), Captain Daniel Américo Rosa Menezes stated that the draft will now be 13.5 meters in normal conditions and 14.5 meters during periods of high tide. The CPSP, which works closely with the Brazilian Navy, said that with special equipment currently being trialed it might be possible, along with further dredging, to get that down to 13.8 meters in the near future.

The CPSP says that the new regulation covers all port terminals, including the six container facilities: Santos Brasil, Grupo Libra, Brasil Terminal Portuaria, DP World Santos, Rodrimar, and Ecoporto Santos. The only area of the port excluded is the Ultrafertil liquid bulk terminal.

The 30-centimeter increase was granted to Codesp around a month after a dredging consortium — formed by Boskalis do Brasil and Van Oord Maritime Operations — started dredging in the Santos quays and main channel.

José Alex Oliva, the president of Codesp, said that with several new technologies and systems, Codesp and CPSP would be able to check and change the official draft at least every three months, and possibly on a monthly basis. That will give greater elasticity to the current process and cut bureaucracy, which will enable carriers to make better use of windows of opportunity when the depth is more advantageous, such as during high-tide periods. Although he did not provide details, Oliva also said that ongoing dredging will further improve the draft.

Sérgio Aquino, the president of the Brazilian Federation of Port Operators, which has been pushing for more draft for several years, welcomed the “excellent news” for Santos, but warned that there was still “a lot of work to be done” to improve so much of Brazil’s moribund infrastructure in and around the major ports.

The extra draft has stoked hopes for the completion of stop-and-go efforts under way since the turn of the century to dredge the Santos channel to 17 meters, with the effort stalling most recently over concerns that dredging would erode a beach in the vicinity of the port and expose the area to greater flood risk.

“If we continue with this new attitude towards dredging and get more deepening [capital] dredging under way, then it is perfectly feasible that we can go down to 15 meters, although the case for 17 meters has still not been proven, especially in terms of cost,” said Washington Flores, the president of Bandeirantes port terminal and logistics company, and CEO of Deicmar, which is Santos’ car terminal.