Brazil could have privatized dredging by end of year

Brazil could have privatized dredging by end of year 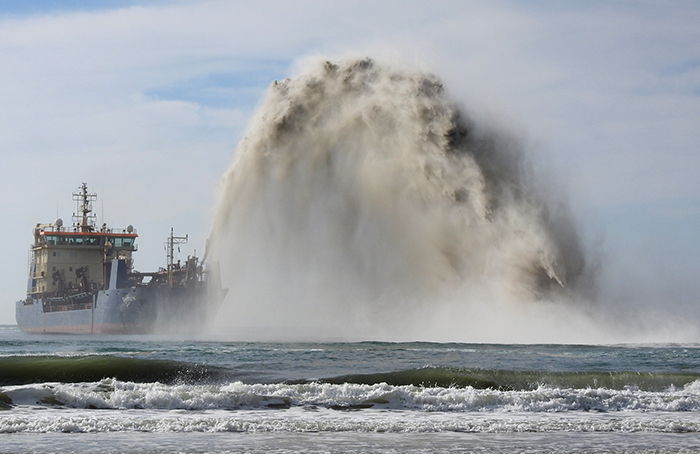 Dredging is one of the most challenging aspects of port administration and management in Brazil.

The strong push for the group, which will be made up of senior members from the Ministry of Transport, the Santos port authority (Codesp), and the regulatory body for waterways (Antaq), comes after Santos and other ports have struggled mightily with costly draft restrictions.

“Santos is the key port for Brazil and São Paulo state, and if it is to remain competitive we must resolve this dredging problem,” said Sergio Aquino, the president the National Federation of Port Operators (Fenop). “On top of that, the port of Santos simply cannot continue with this instability, so the private initiative must be given a chance, as it proposes to guarantee the dredging.”

Santos is Brazil’s and South America’s largest container port, and has been beset by draft restrictions and complications regarding dredging that the Santos and São Paulo Shipagents Association says have resulted in rolled cargo and losses of “hundreds of millions of dollars,” for carriers and shippers alike.

One idea that is backed by the country’s biggest shipping lobbies is the establishment of a specific purpose company, which would be a nonprofit tasked with ensuring that dredging occurs in a timely fashion and to the specifications necessary. Backers include Fenop, the São Paulo and Santos Association of Port Operators, the Brazilian Association of Port Terminals, and the Association of Private Terminals.

Sources in Santos say that Brazilian President Michel Temer is also fully behind the privatization initiative.

Leading executives for carriers operating in Brazil are keen for the privatization of dredging, but are concerned they would be asked to pay twice.

“Sure, we can pay port tariffs for a privatized process, but we will need a rebate for the tariffs we are already paying to Codesp,” said one executive.

Despite this support for privatization, politicians have traditionally been reluctant to give up control of dredging because political parties have allegedly gained a percentage of all the revenues that pass through the heavily politicized port authorities in Brazil.

Meanwhile, some in the industry have their own doubts about privatization.

“I cannot really see the new equation playing out well,” said Robert Grantham, a director for Navegantes-based maritime consultancy SOLVE Shipping, who has worked for carriers and as commercial director for the Itajai Port Authority.

“Dredging tariffs are used to support Codesp, and without that they will be short of funding, and it would be unfair if the carriers had to pay twice over. It seems to be a desperate move because of all that has happened recently.

“Perhaps a better solution would be for a consortium of port authorities to set up their own company and possibly even buy a dredger to carry out permanent maintenance dredging for clusters of ports. Santos would probably need its own, but in Santa Catarina the dredger could be operated at three or four different ports; Itajai, Navegantes, Itapoa, Imbituba, [and] São Francisco do Sul, for example.”

A similar idea almost came to fruition 10 years ago, when Eduardo Requião, a former president of the port authority for the southern port of Paranagua, nearly purchased a secondhand dredger, but the plans fell flat when his brother, who was then the state governor, lost an election and the impetus was gone.