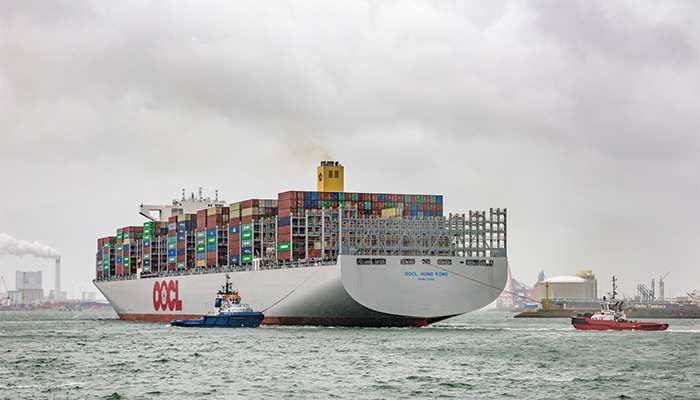 Quayside productivity is weaker on mega-ships, compared with midsize vessels, according to analysis of aggregated 2017 performance data from a selection of the world’s largest container ports.

Analysis of gross crane productivity at 12 of the largest container ports in Asia, the Middle East, and Europe shows an average drop in performance on ships larger than 14,000 TEU capacity, apparently supporting long-held claims by terminal operators that mega-ships are not efficient for them to handle.

The performance data covers the ports of Busan, Tanjung Pelepas, Yangshan, Ningbo, Hong Kong, Jebel Ali, Yantian, Rotterdam, Hamburg, Qingdao, Antwerp, and Bremerhaven from January to June. The data show productivity is optimal for vessels in the 4,000 to 14,000 TEU range and lower for smaller vessels as well as those on the larger end of the scale.

“Smaller vessels, especially feeders, tend to list and trim; the cell-guides are less than optimal, and the ship is very far below the operator’s cabin,” said terminal operations expert Andy Lane of CTI Consultancy, which is based in Singapore.

The need for higher spreader hoists and longer trolley distances is likely the cause of the drop in performance on vessels larger than 14,000 TEU, as crane cycles take longer on ships that have 19 to 22 containers across instead of 13 to 19.

In terms of berth productivity, the sweet spot appears to be between 4,000 TEU and 14,000 TEU where vessels are more stable and better equipped but there are fewer rows of containers.

Terminal operators complain that working mega-vessels is not efficient for them, and there is little upside in cases where call sizes increase just marginally.

The introduction of new alliances by carriers undertaken in large part to defray the risk of introducing larger vessels during weak demand conditions has also impacted productivity for terminal operators by making moves and inter-terminal transfers more complex.

This can be a particular challenge for “split ports” such as Busan, where containers have to be transferred between two port basins, as well as ports with multiple terminal operators such as Hong Kong.

Hutchison-invested terminals at Hong Kong last year implemented a co-management agreement, in part to improve the efficiency of moving boxes between different terminals.

Analysis of JOC.com 2017 port productivity data shows global ports deal with significant swings in business depending on the day of the week.

Terminals at Zhoushan in East China, for instance, handle 30 percent of their business on Saturdays but just 6 percent on Thursdays. Shanghai handles 36 percent of its business on just two days of the week, Sunday and Monday.

The South China ports of Shenzhen and Hong Kong handle a majority of their business at the weekend; the terminals at Yantian handle more than 40 percent of weekly business on Saturday and Sunday.

In North America, the Port of Long Beach does 37 percent of its business on Tuesdays and just 7 percent on Wednesdays.

No correlation was found between how busy a port is on a particular day and delays in wait times for vessels, indicating that major ports have sufficient berth length available to cover peak demand.

In terms of berth productivity, it is on peak days when performance is at its best, the analysis shows.

“There is every probability that the larger ships call during the peak days, creating the peaks,” Lane said.

“The larger ships will get higher crane intensity, and the terminal will work the maximum of cranes, and therefore this is maybe not so surprising. Ports have sufficient quay cranes for the peaks, but these sit idle during the troughs.”