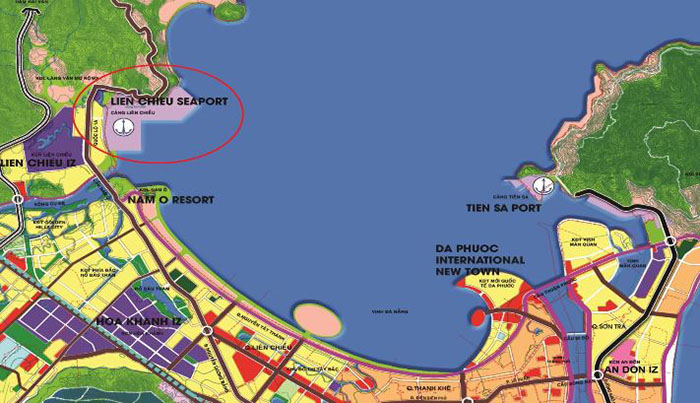 A map of Da Nang showing where the new Lien Chieu terminal will be situated in the city.

Vietnam is planning a major new port facility to alleviate congestion at the Da Nang Port complex, the country’s third-largest port system, which is located in its central region.

A pre-feasibility study for the project at Lien Chieu, which at full build would cost around $1.48 billion, is under review by Da Nang city officials that want to solve capacity problems at the port’s busy Tien Sa terminals.

Da Nang is too far away from Ho Chi Minh City to easily take advantage of the capacity glut at container terminals around the southern city.

The existing Tien Sa terminal is already operating at maximum capacity, with shippers reporting delays as well as overloading at storage warehouses. A $49 million project was launched in July to raise the capacity of Tien Sa to 12 million tonnes of cargo and enable it to handle container ships with deadweight tonnage of 70,000.

Official figures show terminals at Da Nang Port handled a combined 146,000 twenty-foot-equivalent units in the first half of the year, a rise of 19 percent year-over-year. A record 6.5 million tonnes of cargo passed through the port in 2015.

The pre-feasibility study proposes that the new Lien Chieu project be developed on a public private partnership basis with funding from the Da Nang city budget, bank loans and overseas development assistance, or ODA. It is not clear which country would provide the ODA for the project.

One possibility is Japan because the Japanese government already invests heavily in Vietnam. Its agency for coordination of overseas aid, the Japan International Cooperation Agency, known as JICA, signed an agreement in April for the provision of more than $781 million for additional port and road infrastructure in the rapidly growing southeast Asian nation.

The loans are for the development of the deep-water port at Lach Huyen to the east of the northern city of Haiphong, the country’s third-largest, together with supporting hinterland road and bridge links. The port is scheduled to be operational by May of 2018, a delay of five months on the original project plan.

As well as addressing increasing demand for containers in northern Vietnam, the new port would reinforce the international competitiveness of the entire northern region, JICA said.

Despite the strong outlook for trade growth, industry commentators have questioned whether sufficient cargo volumes will be available to justify the large infrastructure and port investment projects taking place in the country.