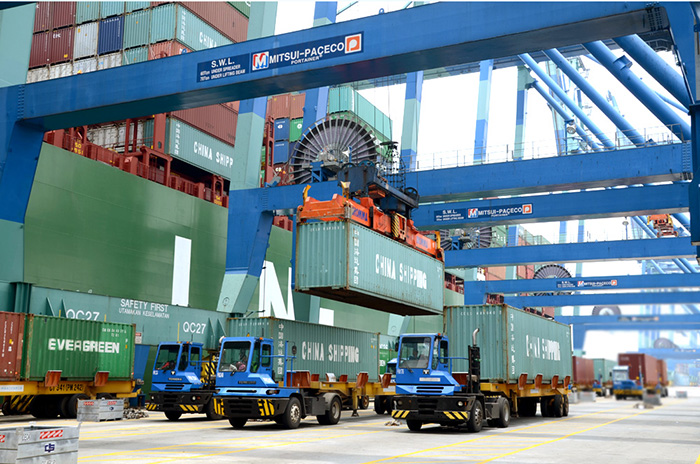 Port Klang, pictured, is adding capacity to ensure it remains competitive with its rivals in an ever-changing global shipping market.

Southeast Asia’s port scene is incredibly dynamic, and 2017 will be a year of significant changes with big implications for shippers as structural adjustments in the liner shipping sector and the region’s economic make-up continue.

The changing market could result in lower terminal handling charges for shippers as container terminals in the region fight to undercut each other on pricing in a bid to secure the volumes of the new vessel-sharing alliances that begin operation in April. These new container line groupings, and the ample capacity already in the region and new capacity set to come online in the future, are creating a hyper-competitive environment that will evolve throughout the coming year.

Southeast Asia is at the moment probably the busiest for port development globally, with no less than five major projects underway on the shores of the strategic Malacca Strait. In addition to Singapore’s massive Tuas development, there are ongoing capacity expansion projects at Malaysia’s two main international ports of Tanjung Pelepas and Port Klang. China also has two large projects in the works as it seeks to create alternative ports on the strategic waterway to help secure its trade, energy, and other needs.

“There is a lot going on in Singapore and Malaysia right now, particularly on the Strait of Malacca,” Jonathan Beard, the head of transport and logistics consulting in Asia with Arcadis told JOC.com.

“In Singapore, the older terms of the leases are expiring so it made sense to relocate the port at this time. Typically, the government is taking a long-term view that this is the last time it will redevelop the port, and [is] also demonstrating to lines and alliances a serious commitment to capacity. The developments at PTP and Klang are largely driven by the key customers — Maersk Line in the case of the former and CMA CGM in the case of the latter.”

Port Klang’s Westports is a facility that will be impacted more than most by service and network adjustments by loss-making container lines as competition for business among regional transshipment hubs heats up.

PSA International’s announcement of a joint venture with CMA CGM to operate four container berths and provide long-term services to the French-headquartered line and its alliance partners will almost certainly have an impact on the Malaysian facility.

CMA CGM accounts for around one-third of total throughput at Westports and more than 20 percent of revenue, and there is concern that the equity stake offered by PSA could see the line shift some of its transshipment business from the Malaysian port to Singapore.

As a long-term strategic effort by Singapore to lock in business in an environment of bigger alliances and a more consolidated industry, this is a story to watch in 2017.

Adding heavily to the dynamism of port activity in Southeast Asia, China at the end of 2016 announced it was investing $1.9 billion to build a new port on the Malacca Strait. From a capacity and commercial perspective, the need for an entirely new development on the busy waterway is dubious, and the move is a strong example of how geopolitics can overshadow market and commercial forces in port development.

The Melaka Gateway port is in fact one of several projects China is undertaking with the goal of decreasing risk related to its energy and trade shipments through the strait. China is also investing in Tanjung Sauh Port on Indonesia’s Batam Island, located at the mouth of the strait, close to Singapore. Despite the ample container capacity on offer in the region, this is planned as a container-focused facility and its first phase is to offer 4 million twenty-foot-equivalent units of capacity.

Other facilities under development in Malaysia include the Chinese-invested Kuantan Port on the east side of peninsular Malaysia facing the South China Sea; and Samalaju Industrial Port, also on the South China Sea, with a focus on dry bulk business.

Elsewhere in Southeast Asia, port congestion will remain a risk in 2017, and measures to offset it can be seen in port sector activity in countries such as Myanmar, Indonesia, and the Philippines.

Although less severe than previous years, congestion did not go away in 2016, with Yangon offering up the most serious and highest profile case.

Handling more than 90 percent of Myanmar’s total trade, a combination of unprecedented growth in trade volumes and infrastructure projects, poor exiting port facilities, inefficient handling processes, and the limited draft of the port resulted in heavy sea and landside delays in the second quarter of the year.

As part of efforts to ensure the problem is minimized this year, a new Japanese-funded automated customs clearance system was launched. The $40 million Myanmar Automated Cargo Clearance System, or MACCS, aims to speed up the flow of goods by automating a number of processes. MACCS will also support requirements relating to the Association of Southeast Asian Nations Single Window program, which intends to integrate the national single-windows of member states to facilitate trade.

Funded by the Japan International Cooperation Agency, MACCS is based on the technology of Japan's Nippon Automated Cargo and Port Consolidated System and its Customs Intelligence Database System. The system is an example of how foreign funds, processes, and technologies are increasingly influencing the nature of business Southeast Asian ports.

Beating congestion will also be a focus in Indonesia this year as the country works on a commitment by the administration of president Joko Widodo to reduce lengthy cargo dwell times. Efforts so far have only yielded positive results at the country’s primary gateway of Tanjung Priok in Jakarta, where dwell times are down to between 3.7 and 4.2 days, from more than one week a year ago.

The focus has now turned to major ports in other parts of the country, such as Belawan on the northeast coast of Sumatra and Tanjung Perak in Java, where dwell times are still an unacceptable eight days.

The main factors driving change in Southeast Asia’s ports are