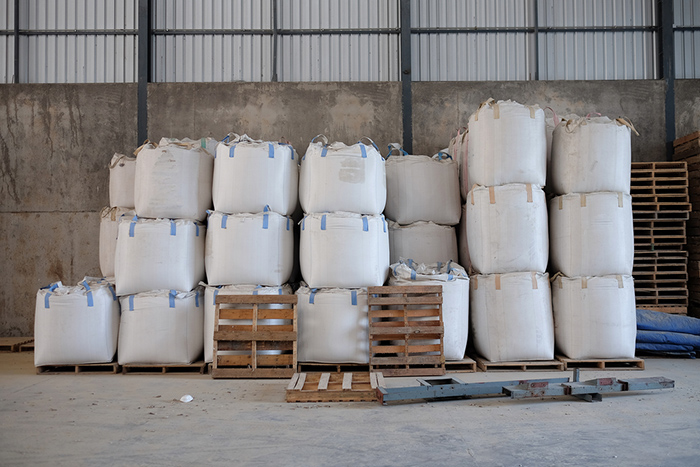 Rice waiting to be shipped.

“Although we do not know how much we will harvest by the end of the year, we know that it cannot reach 1 million tons of exports,” said Song Saran, president of Amru Rice, one of Cambodia’s largest rice exporters and board member of the Cambodian Rice Federation.

Cambodia Prime Minister Hun Sen in 2010 set a target of 1 million tons of rice exports by 2015, a figure that would place Cambodia in the first rank of world rice exporters.

Analysts said at the time that hitting the target would be possible only if the country successfully addressed serious issues blocking competitiveness, including high costs related to transportation. A technical study published by the World Bank in 2012 predicted the 1 million ton target for 2015 would not be reached unless costs and inefficiencies related to ports and logistics and associated issues such as overreliance on the use of containers to ship rice were addressed.

Saran said rice exporters in Cambodia pay a terminal entrance fee of $130 per container compared with just $80 in Thailand and Vietnam.

“We will still not be able to export 1 million tons in 2016 and or in 2017 if we cannot handle all problems that hinder our ability to compete with other countries.”

Overreliance on containers to ship rice is a key problem impacting the competitiveness of the sector, the World Bank said in a version of its study titled "A More Detailed Roadmap for Cambodian Rice Exports," which was republished this year.

“As a small developing economy, the number of incoming containers in Cambodia is relatively limited compared to Thailand and Vietnam. This has several implications. First, Cambodia’s outgoing container freight rates will always tend to be higher than its neighbors. Second, finding enough food quality containers in this smaller national universe is increasingly a constraint.”

There is reluctance on the part of shipping companies to allow empty containers to be transported upcountry where most of the rice in Cambodia is produced and milled, the bank said.

“As a result, virtually all bagged rice intended for formal export is trucked to Phnom Penh where it is loaded into containers and then shipped out of the country through the container ports located in Phnom Penh and Sihanoukville. Notwithstanding the additional transport costs to ship to Sihanoukville, most rice exports are shipped from this port and the trend is accelerating."

When containers are not available in Sihanoukville, they are shipped in from Phnom Penh, and the exporter is charged double, Saran said.

“If there is only one container, then why charge two times.” he said.

The CRF has asked the government to intervene. “Buyers like to say that rice from Vietnam is cheaper than rice from Cambodia,” said Kim Savuth, head of the CRFs cost competitiveness executive committee. "We have sent a request to the Ministry of Public Works and Transport for intervention to cut prices at the port and for some transporting companies to at least (have prices) comparable to neighboring countries.”

Physical limitations in Cambodia’s port facilities mean the best solution is to barge uncontainerized milled rice as a transit good down the Mekong River for export via Saigon, the World Bank said.

“The current lack of a deepwater port precludes Cambodia from competing in the 5 million ton West African market for fragrant and white rice even once its free on board costs have been lowered to competitive levels,” the  bank said.