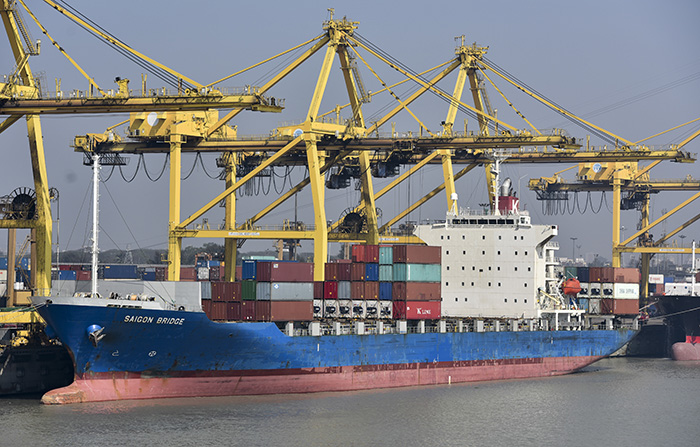 It could take months before the broken Chittagong cranes are again operational.

Chittagong exporters, particularly the time-sensitive apparel makers that drive the majority of volume through the top Bangladesh gateway, are grappling with delays after a ship knocked two gantry cranes out last week, slashing container capacity from gearless vessels by half.

Port users fear further delays in container handling in the already congested port following the incident, and apparel manufacturers worry delays may lead to order cuts by foreign buyers as some vessels may need to wait more than 10 days to berth. Technicians from Japan’s Mitsubishi Corporation, which built the two cranes, have been invited to assess the damage and repair them, but it may take several months to repair the cranes, port officials said. 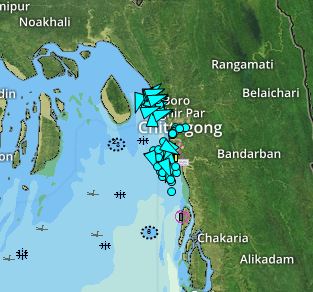 This screenshot from AISLive shows congestion around the port of Chittagong Friday afternoon.

“After the crane incident the congestion will increase further,” said Siddiqur Rahman, president of Bangladesh Garment Manufacturers and Exporters Association. “Apparel makers will incur huge loss unless the two cranes are repaired quickly and put on operation.”

Port officials said before the Eid vacation (June 25 to 27) an average some 14 vessels had to wait at the outer anchorage. After Eid vacation on June 28, following the incident, 24 vessels were waiting to berth. The port’s container yard is running past its capacity of 36,357 TEU and is currently hosting 40,000 TEU.

The accident took place June 25 when the X-Press Suez, owned and operated by Singapore-based Sea Consortium, rammed into two cranes while berthing at the Chittagong Container Terminal. The 184-meter long vessel was carrying 800 containers at the time.

Although the terminal is closed, a jetty designated for goods moving to and from the Pangaon Inland Container Terminal will handle international shipments, but only geared vessels will be able to use that site, port spokesperson Zafar Alam told JOC.com.

“We are going for alternative types of management to avoid any congestion during the interim period until the two cranes are in place after repair,” he said.

Port officials said that geared vessels can use the terminal that was struck until repairs are complete.

The cranes that were hit were installed in 2007 to increase the port’s capacity and do 30 lifts per hour, but have recently been doing 20 lifts per hour.

Apparel is the major export sector for Bangladesh, providing nearly 80 percent of the country’s foreign currency. In fiscal year 2015 and 2016 Bangladesh earned a total $34.24 billion from merchandise shipments, of which $28 billion came from apparel exports, which is the biggest source of Chittagong port traffic. IHS Markit expects that merchandise exports from Bangladesh will rise 9.5 percent year over year this year. Much of that growth will be driven by ready-made garments, which make up 80 percent of all exports from the country, and will come even as the local currency, the taka, appreciates against the dollar this year, to 83.2 per US dollar against 78.7 per dollar last year, according to IHS Markit.