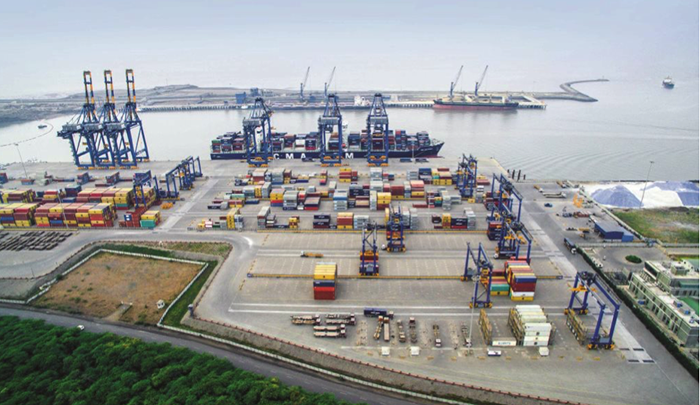 The private Indian port of Mundra has emerged as a major threat to public container gateways on India's west coast.

India’s major, or public, ports are slowly regaining market share lost to their so-called minor, or private, rivals over the past few years, reflecting the progress of the ongoing Sagar Mala port development program.

An analysis of new port data collected by JOC.com reveals major port throughput growth in the first half of the fiscal year outpaced that of their private competitors: 5.2 percent to 4.9 percent year-over-year. Major ports are poised to make further market share gains as new legislation allowing tariff flexibility for major ports takes effect, which would enable them to charge market rates for services, greatly increasing their competitiveness.

The collected data shows Gujarat State, which hosts the biggest non-government ports of Mundra and Pipavav, accounted for 72 percent of total first-half throughput handled by minor ports, followed by Andhra Pradesh, at 14.1 percent, and Maharashtra, at 6.6 percent. Cumulatively, these three states accounted for roughly 93 percent of the total minor port traffic in the six-month period.

India has about 200 minor ports whose ability to exercise a market driven tariff regime allowed them to grab significant market share over the past decade as major ports stagnated due to years of underinvestment and bureaucratic controls.

In the past two years, however, much of that has changed. The Narendra Modi government pledged to invest heavily in port development in order to rev up trade growth and authorities have made progress on numerous port infrastructure and policy upgrades.

As a result, major ports’ combined market share increased from 55.26 percent to 56.56 percent last fiscal year, while that figure in the April-to-September reached 57.4 percent. Shorter turnaround times for ships have been crucial, as average turnaround fell from 2.18 days previously to 2.04 days, and average output per ship berth day rose from 12,342 tonnes (13,576 tons) to 13,584 tonnes in fiscal year 2015 and 2016, according to the Ministry of Shipping

Though it’s still too early to tell if the change is the beginning of a long-term trend, there’s no denying that a transformation is occurring at major ports that together account for roughly 70 percent of the country’s container trade.