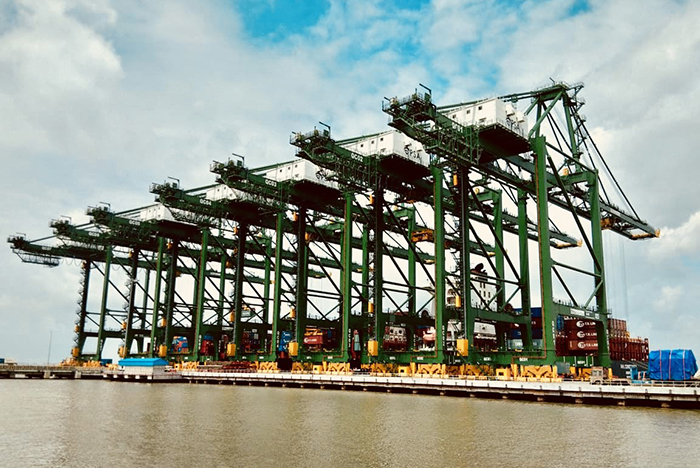 Located in the Sistan-Baluchistan Province on the southeastern coast of Iran, Chabahar is about 550 nautical miles from Kandla Port Trust (KPT) and approximately 790 nautical miles from JNPT, two of the largest publicly operated ports on India’s west coast. India Ports Global Pvt. Ltd. (IPGPL), a special purpose joint venture formed by KPT and JNPT, holds a 10-year concession for the management and operation of two dedicated berths at Chabahar. In exchange, India as pledged $500 million for the redevelopment of Chabahar’s harbor, a strategic regional investment aimed at providing a smoother flow of oil and energy cargo to and from Iran amid international sanctions. The Chabahar harbor features two ports, Shahid Beheshti and Shahid Kalantri, but India’s investment interests remain restricted to the former.

IPGPL took over operations at Chabahar at the end of December 2018, but due to underlying demand concerns, carriers have shown little appetite for calling the port. IPGPL handled just 225 TEU in its first three months of operations this year.

To reinvigorate carrier interest, the Ministry of Shipping recently asked JNPT and KPT authorities to implement an incentive pricing scheme for traffic to and from Chabahar, involving discounts up to 40 percent on normal vessel and container-related charges for Indian coastal cargo.

“In order to reduce the revenue gap and also to promote Shahid Beheshti Port, it is important to divert Indian origin cargo to this port,” the ministry said in a statement. “Therefore, it is appropriate to offer discounts in line with current concessional rates for coastal movement on cargo as well as vessel related charges.”

While port-owned JNPT terminals have been open to supporting the government’s inducement program, private terminals operated by APM Terminals, DP World, and PSA International have expressed reservations about the lower tariff threshold, given their concession obligations toward the landlord port, and sought to be appropriately compensated through terminal-paid revenue share adjustments. IPGPL officials and their JNPT counterparts have had multiple meetings with private operators in the past two months, but a broader, collaborative arrangement has yet to be reached.

As a result, all ship calls on the India-Iran route have thus far been serviced by the JNPT-run terminal or DP World’s older, underutilized Nhava Sheva International Container Terminal (NSICT), which operates under a controversial 2005 tariff regime with a royalty commitment model.

Tariff incentive moves by the Indian government, centering on a wider coastal or domestic transshipment development program, have become a “pet peeve” of private terminal operators trying to navigate a highly competitive market environment. Generally, terminals are obligated to offer a rebate of up to 60 percent of the normal tariff — along with priority berthing arrangements — for coastal traffic, and a similar proactive approach has also gained ground for transshipment handling following cabotage law reforms in May 2018.

The Indian Private Ports & Terminals Association (IPPTA), an umbrella organization that represents private operators and investors, recently asked the government to review existing royalty and revenue-sharing obligations with landlord ports for coastal cargo and transshipment handling. “At 60 percent of the normal tariffs, terminals tend to lose money or just break even for handling coastal containers as the services offered are the same as a normal [export-import] container,” IPPTA said in a statement. “Going forward, terminals may find it extremely difficult to sustain [themselves] for long, and this could adversely impact the growth of container traffic, unless we get some support from the respective ports.”

Given the level of investment, the viability of the Chabahar project is critical to India’s goal of becoming a $5 trillion economy by 2024-25, as is shifting more cargo away from its congested road networks to marine highways for greater supply chain efficiency.

At the same time, high vessel-related charges have been at the center of mainline carrier concerns when considering more direct calls at Indian ports to take advantage of a liberalized coastal market. For example, a recent industry study found that a large ship call with 2,500 container moves at a modern terminal in the JNPT harbor would cost the operator $127.65 per unit on average, compared with $76.27 at Sri Lanka’s Port of Colombo, which thrives on transshipment cargo, mostly from the Indian subcontinent.