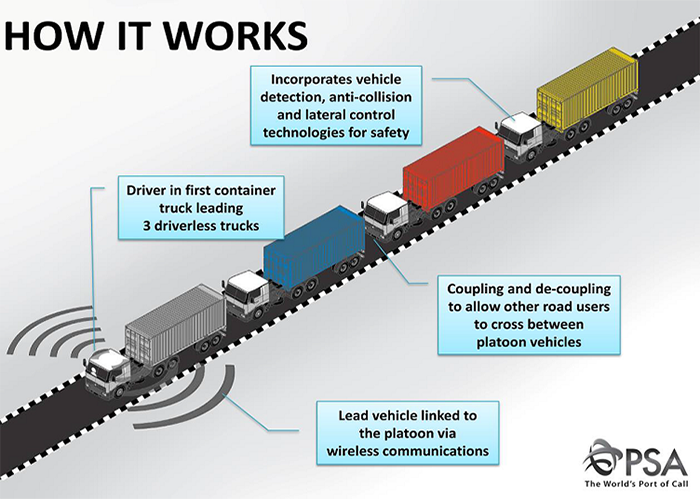 A diagram of the autonomous freight transport system under development for the port of Singapore.

Singapore’s Ministry of Transport and PSA International signed agreements with Scania and Toyota for development of an autonomous truck platooning system to transport containers between container terminals in the Southeast Asian island-state.

If successful, the system will boost the competitiveness of the port by reducing reliance on manual labor and its associated costs and complexities. This should contribute to improved service reliability and more freedom to set competitive tariffs at a time of rising competition between regional transshipment hubs.

The agreement covers the design, development, and testing of a system involving a human-driven lead truck at the head of a convoy of driverless trucks that is expected to be running on a trial basis on Singapore’s public roads as early as next year.

PSA said the agreements take Singapore one step closer to the reality of autonomous freight transport.

“Efficient freight movement is critical to the competitiveness of our port. Truck platooning will also alleviate our shortage of manpower, and allow more freight movement to be conducted at night to ease traffic congestion,” a statement from the company said.

The agreements follow a request for proposal process and a memorandum of understanding signed between PSA and the MoT in October 2015.

Under the first phase of development, Scania and Toyota will work on technologies to enable heavy vehicles to move in leader-follower formation and the full automation of loading and unloading cargo.

First phase work, which is expected to last for around one year, will take place in the research centers of the two automotive giants in Sweden and Japan. One of the two companies will then be selected to carry out local trials in Singapore on a designated 10-kilometer (6.2-mile) stretch of highway, as well as some additional local technology development.

“We face a shortage of truck drivers. In this regard, truck platooning technology presents us with an opportunity to boost productivity in both the port sector and the trucking industry. It will also open up opportunities for truck drivers to take on higher-skilled roles as fleet operators and managers,” said Pang Kin Keong, permanent secretary for transport and chairman of the committee on autonomous road transport in Singapore.

Testing in Singapore will initially involve hauling containers between Brani Terminal and Pasir Panjang Terminals. The route may eventually be scaled up to include haulage within the port area and between Pasir Panjang Terminals and Tuas Port. Testing of the system is expected to be complete by December 2019.

Singapore began construction of its next-generation Tuas terminals in the spring of last year. When complete, phase one will have capacity to handle up to 20 million twenty-foot-equivalent units per year. The full development will have capacity for up to 65 million TEUs per year.