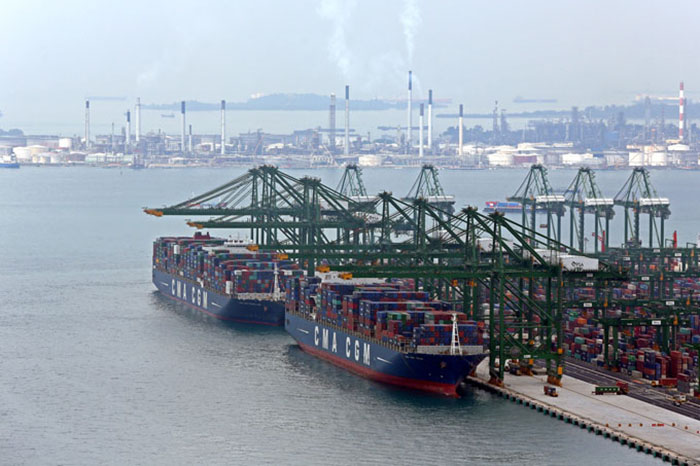 CMA CGM and PSA International's Lion Terminal in the port of Singapore could upend the Southeast Asian transshipment market.

CMA CGM and PSA International have doubled the capacity at their jointly-owned Singapore container terminal as it prepares to handle the French ocean carrier’s mega-ships and those of partners in the Ocean Alliance that launches on April 1.

The CMA CGM-PSA Lion Terminal’s annual capacity has risen to 4 million twenty-foot-equivalent units (TEUs) with the addition of two new berths in phase two of the development of the facility that began operations last July.

CMA CGM said the terminal has achieved an average gross berth productivity of more than 160 moves per hour handling mega-ships since the beginning of 2017.

“This is another exciting milestone for CMA CGM as part of the group’s continuing efforts to make Singapore our main hub in the region, while reiterating the importance of Singapore to our global strategy,” said CMA CGM Asia senior vice president Jean-Yves Duval.

PSA Singapore, one of the world’s largest terminal operators, has a 51 percent stake in the joint venture, which was established last June. CMA CGM, the third-largest container line by deployed capacity, holds the remaining stake.

The deal was viewed as part of the Singapore government’s bid to win back some of the container traffic lost to the neighboring Malaysian hubs of Port Klang and Tanjung Pelepas, which reduced the city-state’s share of the Southeast Asia transshipment market, the world’s largest, to 62 percent in 2015 from 89 percent in 2000.

The French carrier was the biggest customer at Port Klang, accounting for over 20 percent of terminal operator Westport’s volume of around 9 million TEUs in 2015. Pressure on Port Klang and other transshipment hubs may continue to grow as the new alliances take shape.

The new service networks may rely upon fewer transshipment hubs because of the cost savings such a strategy generates, according to a recent analysis of LinerGrid, a Denmark-based company that uses mathematical simulations to optimize shipping networks.

CMA CGM is currently reshuffling its terminal portfolio, seeking buyers for the terminals in the United States operated by APL, the liner unit of Singapore’s Neptune Orient Lines, which the Marseille-based carrier acquired for $2.4 billion in mid-2016.

The group’s ports unit, Terminal Link, is a member of a consortium with Deutsche Equity Partners and Cyprus-based Belterra Investment that filed a bid last week for a 67 percent stake in Thessaloniki Port Authority, the operator of Greece’s second-largest container port after Piraeus.

Global Shipping Outlook: A Sneak Peek at 2021
Port Performance North America: Managing Cargo Flow During a Pandemic — and Beyond
END_OF_DOCUMENT_TOKEN_TO_BE_REPLACED