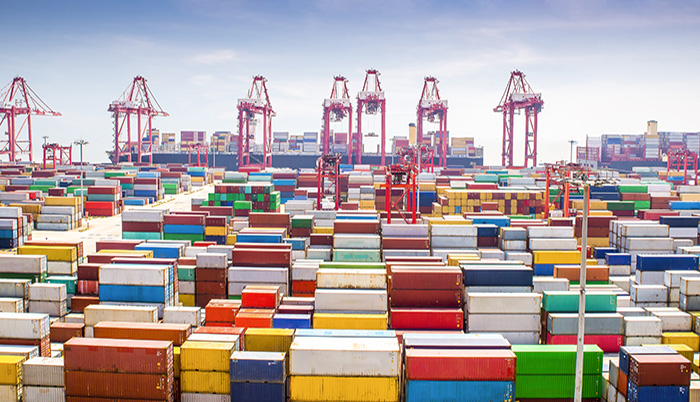 Both facilities had seen double-digit, year-over-year growth in March.

The strong showing may reflect some additional business due to the resetting of the alliances, but is more likely a sign of the good trade performance by the overall economy over the past months.

Throughput at China’s top eight container ports grew by close to 6 percent in April, taking total volumes in the first five months to 51.23 million TEU, 6.2 percent up on the same period in 2016.

The strong port figures were matched by good growth in the value of export and imports, which in April rose 8 percent and 11.9 percent, respectively, in dollar terms.

Analysts said the relatively bright outlook for the global economy should mean China’s exports continue to perform well in the months ahead, but warned of headwinds for imports due to policy tightening.

The manufacturing sector expanded again in April, but at a much slower pace than before. The National Bureau of Statistics' Purchasing Managers' Index (PMI) fell to a six-month low of 51.2 in April from the five-year high of 51.8 in March. A reading of more than 50 reflects expansion in manufacturing activity while below 50 reflects contraction.

The Caixin/IHS Markit Manufacturing PMI, which measures performance by small- and medium-sized manufacturers, fell to 50.3 in April. The figure was below that forecast by analysts and represents a significant decline from the March figure of 51.2.

Hong Kong had another strong month as year-over-year volumes climbed 12.7 percent to 6.66 million TEU after throughput increases of 11.9 percent and 13.7 percent in February and March.

April volumes through the main eastern and northern ports of Xiamen, Qingdao, and Dalian were flat.

Vessels calling at Shanghai have been experiencing delays since the beginning of April due to a combination of rising volumes, changes due to the alliance reshuffle, and weather issues. A major cause of the delays was overbooking by carriers, which resulted in containers needing to stay gated-in at the terminal until next departure. This reduced the turnover and efficiency of terminal operations and led to a shortage of empties at inland depots, further exacerbating congestion.

Shanghai International Port Group has been trying to address the capacity issues and has been shifting some port calls from Yangshan to other terminals. Shippers have also been rerouting cargo to other ports, including Ningbo-Zhoushan.