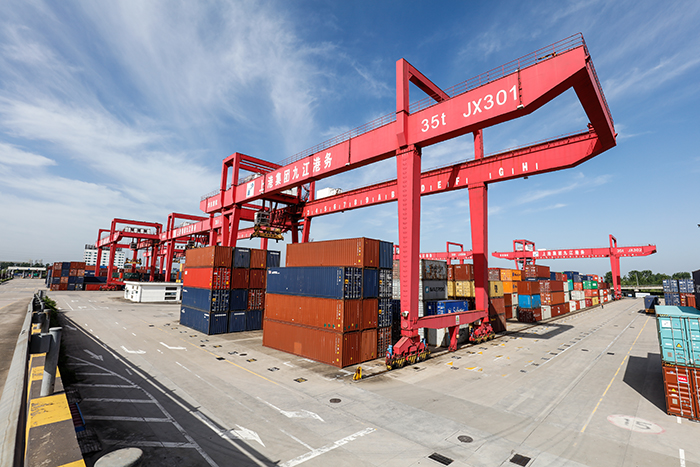 Chinese port growth has beat expectations so far this year.

China’s main container ports in the month of May continued their strong performance since the start of the year with a double-digit expansion in throughput compared with May 2016.

The top 10 container ports — including Shanghai and Ningbo-Zhoushan in the Yangtze River Delta; Shenzhen and Guangzhou in the Pearl River Delta, and Qingdao and Dalian in the northern Bohai Rim — handled a combined 15.3 million TEU in May, 10.6 percent more than the 13.9 million TEU handled in May last year, the latest figures from the Shanghai Shipping Exchange show.

The strong throughput data comes amid renewed warnings of weakening business sentiment and manufacturing activity, and expectations of slowing GDP growth for the remainder of 2017 and into 2018.

With the exception of the northeastern port of Dalian, which handled fewer containers in May than it did in the same month last year, all of the ports in the top 10 list managed to grow volumes. Shanghai, Ningbo-Zhoushan, and Guangzhou performed particularly well, with throughput up by 14.7 percent, 27.2 percent, and 14.2 percent respectively.

On a year-to-date basis, throughput at the top 10 ports reached 70.4 million TEU, 7 percent higher than volumes handled during the first five months of 2016.

Shanghai handled 1.5 million TEU more containers over the first five months of the year than it did last year, while Ningbo-Zhoushan handled an additional 1.2 million containers, taking it ahead of Shenzhen to become China’s second-busiest port in terms of volumes handled on a year-to-date basis.

The strong container throughput growth over the first part of the year reflects good GDP performance by the overall economy, which grew 6.9 percent year over year in the first quarter.

In its World Economic Outlook, IHS Markit attributed the better-than-expected growth in part to policy stimulus to ensure stability ahead of the 19th Party Congress, but warned that excess industrial capacity and a correction in the housing market would trim growth back to around 6.6 percent over the full year.

IHS Markit’s tri-annual China business outlook survey of 12,000 manufacturers and service providers, which was released Monday, signals a weakening of business sentiment toward the year ahead.

Companies surveyed forecast increases in output and new orders, but the level of optimism was down from February to near record lows in both cases. Survey respondents said tough competition, raw material shortages, and unstable market conditions were among key threats to outlook.

“Lower levels of confidence were recorded across both the manufacturing and service sectors to suggest a broad-based growth slowdown in the next year,” Fiddes added.

The Caixin/IHS Markit Manufacturing Purchasing Managers' index (PMI) contracted for the first time in 11 months in May, with a reading of 49.6. A reading above 50 indicates expansion in manufacturing and a reading below that level points to a contraction in activity.

"Softer growth in output reflected a relatively muted increase in total new orders during May," Caixin and IHS Markit said in a joint press release.

An official PMI that focuses on larger state-owned enterprises continued to show expansion in manufacturing, with a reading of 51.2 for May.

Solving for Uncertainty: A Guide to Variable Transportation Budgets
END_OF_DOCUMENT_TOKEN_TO_BE_REPLACED