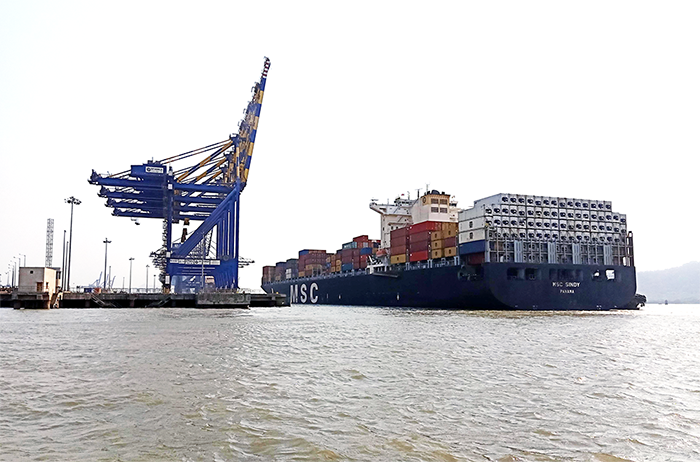 Following the February completion of a major dredging project that increased the port’s main channel from a draft of 14 meters (about 46 feet) to 15 meters, JNPT can now handle vessels with a capacity of 12,500 TEU without tidal restrictions.

Aided by that deeper draft, DP World’s Nhava Sheva (India) Gateway Terminal (NSIGT) recently hosted the MSC Sindy with an alongside depth of 15.6 meters, touted as the deepest draft ship ever to have called at the port.

The 336.7 meter vessel, featuring a 45.6 meter beam and a 9,850 TEU nominal capacity, has been deployed in MSC’s joint India-Mediterranean (IMED) Service with CMA CGM and Cosco Shipping Lines. The weekly loop deploys seven vessels, five from MSC and one each from the other two partners, with a full port rotation of JNPT, Hazira, Mundra, Salalah, King Abdullah, Port Said (West), Mersin, Istanbul, Asyaport (Tekirdag), Piraeus, Iskenderun, King Abdullah, Salalah, and back to JNPT.

Officials told JOC.com that the terminal notched an impressive average crane rate of more than 32 moves per hour during the ship's 23-hour berth stay.

Carried out under a 2017 contract with a public outlay of about Rs. 2,000 crore ($288 million), the dredging project involved widening JNPT’s main shipping channel from 370 meters to 450 meters and extending it from 33.5 km (21 miles) to 35.5 km, in order to match the required depth. The harbor dredging was of particular importance to a 4.8 million TEU capacity terminal concession awarded to PSA International, the first phase of which opened to operations in February 2018.

PSA’s Bharat Mumbai Container Terminals (BMCT) handled 520,126 TEU in its first full year in operation, which ended March 31, and throughput in April was up another 4.3 percent from the previous month, according to data collected by JOC.com.

With two terminals, including the country’s first privately built Nhava Sheva International Container Terminal (NSICT), DP World has a significant foothold at JNPT, with its fiscal 2018-2019 combined throughput surging 15 percent year over year to 1.5 million TEU. However, the company has lately been prioritizing its newer investment, NSIGT, in a bid to sidestep tariff complications at NSICT.

As a result, NSIGT boasts a number of other “firsts” to its credit at the port, such as the largest-ever container ship call at an Indian port, the 13,000-TEU MSC Cristina in April 2017; an advanced, optical character recognition (OCR) technology-based gate solution; and the successful handling of a complex, 110-ton heavy-lift cargo operation a year ago.

As vessel sizes grow and trade demands heighten, the JNPT authority and its private terminal concessionaires have doubled down on infrastructure investments and other innovative efforts to shore up service levels, with radio-frequency identification (RFID) technology-enabled container tracking service playing a far larger role in such efficiency drives.

The government is also considering other major initiatives to support the country’s emerging containerized trade. Heeding appeals from local shipping trade groups, a Ministry of Commerce-headed committee recently recommended that JNPT review and rework its vessel-related charges to a more competitive level.

“The port charges levied on ships continues to be abnormally high [four to five times at least as mentioned by some stakeholders] as compared to certain important foreign destinations in the region,” officials said at a recent stakeholder meeting. “It is necessary to reduce port charges to international rates to ensure competitiveness of our exports and facilitate imports for value addition and re-export of value-added products.”

A lower tariff scale can further propel government moves to lift the attractiveness of Indian ports as direct ports of call on the strength of a liberalized cabotage rule enacted a year ago. A previous study by global port design and consulting firm AECOM found that terminal handling charges and vessel-related costs at Cochin port were approximately 30 percent higher than those at the port of Colombo, Sri Lanka. This is one major factor hampering DP World's efforts to build up a transshipment footprint for its flagship Vallarpadam Terminal at Cochin.

“The cost of logistics is relatively higher in our country than comparable countries due to inefficiencies created by lack of standardization,” Pirojshaw Sarkari, CEO of third-party logistics provider Mahindra Logistics, said at an industry event in New Delhi last week. “Standardization needs to take place across the industry, be it pallet or vehicle size, warehousing standards, contracting standards or facilities for drivers.”

Anant Swarup, joint secretary at the Indian Ministry of Commerce & Industry, said the department is working on various measures to reduce logistics costs and that standardization in pricing processes is vital to reaching that goal.