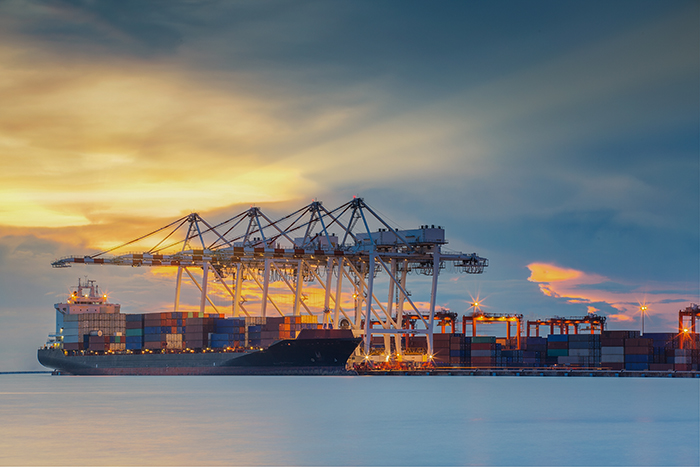 Koji Kajiyama, assistant manager at the Port and Urban Projects Bureau of the Kobe city government, told JOC.com that while most of Kobe’s 11 container terminals returned to normal operation in the days after the typhoon, two of the port’s Rokko Island terminals, RC6 and RC7, both operated by Nippon Container Terminals and Mitsubishi Logistics, were hampered for weeks. All five cranes serving the terminals only resumed normal operation at the end of December. Kajiyama said vessels scheduled to berth at the two terminals were diverted to five other terminals, including three on Port Island in Kobe, and one international service temporarily stopped calling at Kobe.

Container terminals and public berths were damaged by the storm surge, and stored cargo, warehouses, container cranes, and other cargo handling equipment were damaged by extensive flooding and strong winds, which gusted at up to 209 kilometers per hour (130 miles per hour). The port also suffered power cuts after transformers were flooded and caused several fires. Dozens of containers were also damaged, and Kajiyama said more than 40 were hurled into the sea, sank, and subsequently had to be salvaged.

He said floating containers and vehicles dislodged by the flooding caused further damage to warehouses and facilities, and a fire that ignited when a cargo of magnesium came into contact with water continued to burn until Oct. 26, about eight weeks after the typhoon struck.

Container volume at Kobe in recent years had steadily increased by about 100,000 TEU each year, from 2.55 million TEU in 2013 to 2.92 million TEU in 2017. According to preliminary figures, the port still handled a record 2.94 million TEU last year, but Kajiyama attributes the lower growth rate to the negative impact from the typhoon.

“Unfortunately last year, the number of containers handled at our port fell below our expectations after damage by typhoon Jebi. Due to steady growth performance in the first half of last year, we estimated that the number of containers we would handle in 2018 would again increase by about 100,000 TEU over [the full 2017] year. But in reality, the annual increase was only 20,000 TEU because of the damage and disruption to the container terminals and associated facilities caused by typhoon Jebi,” he said, noting that container throughput rose slightly in October but fell in November and December as the impact of the storm took its toll on port operations and the local economy. Volume figures for the early part of 2019 have yet to be released.

Kobe, the third-busiest container port in Japan after being surpassed by Yokohama in 2017, sports 78 weekly international services, as well as a raft of domestic feeder routes thanks to its position as the gateway to western Japan. Of those international services, the vast majority serve intra-Asia trades, with 33 loops calling southeast Asia, 28 connecting to China, and eight serving South Korea. By comparison, just five trans-Pacific services and one European service call at Kobe. “Now, we aim to maintain and expand the number of Northern American and European trunk lines,” said Kajiyama.

The port is launching a campaign to inform shippers and carriers that normal operations have been resumed, as well as requesting government subsidies to help offset the cost of new services and port-related logistics.

Kajiyama said it is difficult for Kobe city officials to put a total price tag on the cost of the damage or quantify the amount of lost business caused by the typhoon because consignors and shipping lines bore most of the liability.

He added the Kobe city government approved a supplementary budget of 11.3 billion yen ($102.3 million) to cover the cost of emergency repairs to port infrastructure. This included works to restore power supplies and the replacement and repair of cargo handling machinery.

Following flooding caused by the typhoon, Kajiyama said the Kobe port is planning to raise the height of sea walls and implement other flood prevention measures over the next several years to help mitigate the damage caused by future violent storms.

Jebi caused similar damage at Osaka port, where several container cranes collapsed and about 2,500 containers were wrecked in the Yumeshima and Sakishima terminal areas, according to Jun Kobayashi, a spokesperson for the Osaka Port and Harbour Bureau. Kobayashi told JOC.com the typhoon generated a five-meter storm surge with maximum wind speeds of 60 meters per second (about 134 miles per hour) at the Yumeshima terminals, even stronger than the maximum gusts at Kobe.

The strongest storm to hit Japan in 25 years, Jebi is estimated to have caused total insured losses of $4.5-5.5 billion in the Kobe and Osaka region, according to separate forecasts by risk modelling firms AIR Worldwide and RMS.

Despite the disappointing volume growth, Kobe port is pressing ahead with a 30-year masterplan, first announced in 2017 to mark the port's 150th birthday, to build a new container terminal on an artificial island south of Rokko Island. Kajiyama said details about the complex, due to be completed around 2030, will include warehousing and manufacturing facilities in addition to the container terminal, but specific facilities and terminal operators have yet to be determined.